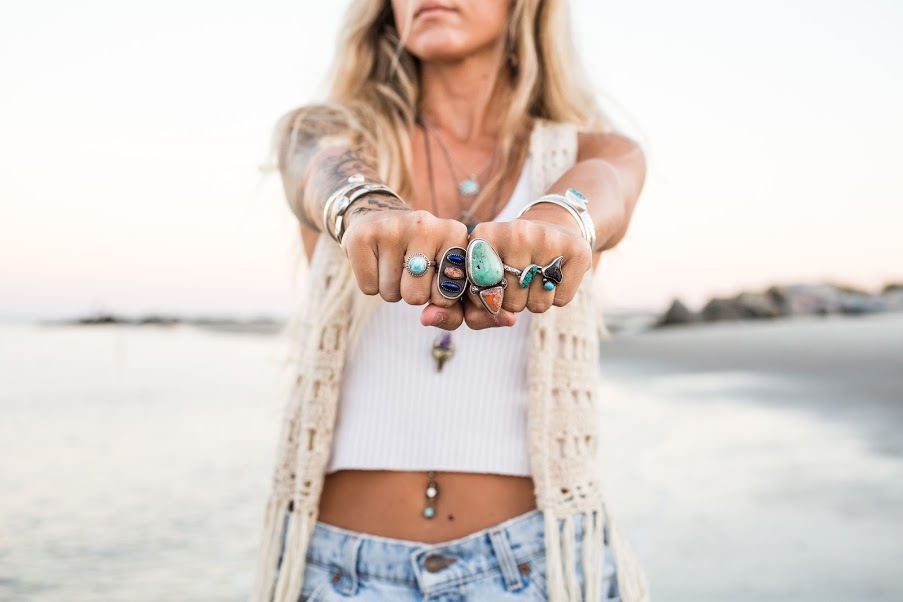 First published in Vie Magazine, as KayPea: Silversmith with a Heart of Gold, August 2020

The countdown begins. Only two minutes until Kristin Mein, silversmith behind the brand KayPea (pronounce “KP”), drops her new collection. She’s teased her Instagram followers for a few days now, and those on her email list have gotten a few days heads up. With a nearly sold out online shop, fingers hover over the refresh button to get the first bite. The clock strikes, and it’s game on. Kristin posts sold pieces on her Instagram story minutes after the online shop became live. Sold, sold, sold. Once again, Kristin makes a clean sweep and the lucky owners of the newest KayPea collection DM ring sizes, choose band styles, then anxiously await the ten-day period for customization and delivery.

The cult following of KayPea jewelry began in Charleston, South Carolina, and has spread across states and international borders. Which makes sense, considering Kristin once sold jewelry on the streets of Bocas del Toro, Panama. But let’s start at the beginning.

Kristin, a Charlottesville, Virginia native, made jewelry as a hobby since she was a kid, starting with friendship bracelets and progressing into beading and basic wire-wrapping jewelry during her college years, where she sold in a few boutiques. After graduation in 2008 – a tough year for any business, let alone a new graduate – Kristin took her environmental conservation degree and worked at a sea turtle conservation project in Costa Rica.

“While I was down there, my now-husband was working in D.C. and hated his job and wanted to become a scuba divemaster,” Kristin said. “So, after I finished the sea turtle conservation project, the choice was to go back and live in my parent’s basement and get an unpaid internship somewhere or just stay in Latin America and see what happens.”

The couple settled in Bocas del Torro, Panama. Due to lack of resources, limited shipping options, and no opportunity to sell online, jewelry making was limited. But, Kristin made the best of it, occasionally selling her designs on the streets, “with all the Rastafarian hustlers, which was kind of a funny time.” Jewelry took a backseat when she and her now-husband were involved in other business ventures, like a partnership with an American businessman on an eco-lodge. Six years sailed by, the couple got married and decided to move back to the States. Running her own business shot to the forefront. “I wanted to take making jewelry to the next level and make jewelry from scratch,” Mein said. “Rather than buying preassembled pieces and charms, I wanted to take the basic materials and make something completely unique with them.”

It turns out, their honeymoon through Southeast Asia brought more than a new chapter for the newlyweds. It was then Kristin discovered a jewelry studio in Thailand that offered silversmith classes. The couple took a one-day introduction class, and a week later, they went back for a second day with the same teacher. “After that trip, I was ready to take it on and teach myself and grow and learn,” Kristin explains. “I taught myself a lot on the internet and at a lapidary school in Georgia to grow my skill set.”

KayPea is known for an eclectic, colorful, beachy, bohemian vibe with unexpected pairings. Silver shark’s teeth also make an appearance, a nod to Charleston’s coastal influence. So, why Charleston? Friends in Charleston beckoned and not wanting to return to their home state of Virginia, the couple noticed beaches and, as Kristin said, “If a palm tree can survive, so can I.” Again, it was back to hustling jewelry.

KayPea began selling at farmer’s markets in Charleston for exposure, which was great, but experience among the Panamanian hustlers taught her a few things. “Knowing what you want your market and client to be,” Kristin said. “I wasn’t making expensive jewelry (in Panama), but everybody wanted to haggle for the price.” The disparity of vacationers in a developing country and Kristin from the States meant she was unwilling to sell pieces for pennies. “It was fun at the time, but that was not my ideal clientele,” Kristin said. “And that’s translated throughout my whole experience making jewelry.”

Now, Kristin is choosy about selling at markets and focuses her energy online. She’s more deliberate with her buying choices as well, going to the Tucson Gem & Mineral Show in Arizona with designs in mind before she picks up the first stone. Working at Charleston’s art collaborative, Redux Contemporary Art Center has also shifted her vision to understand what she’s creating is art rather than just an accessory.

Which you’ll most likely fall in love with when you pop on her Instagram. And when you see an upcoming sale with a piece you can’t live without, I leave you with the parting words I tell myself before each collection drops: Good luck.

8 Emotions You’ll Feel When Your Fishermen is Away