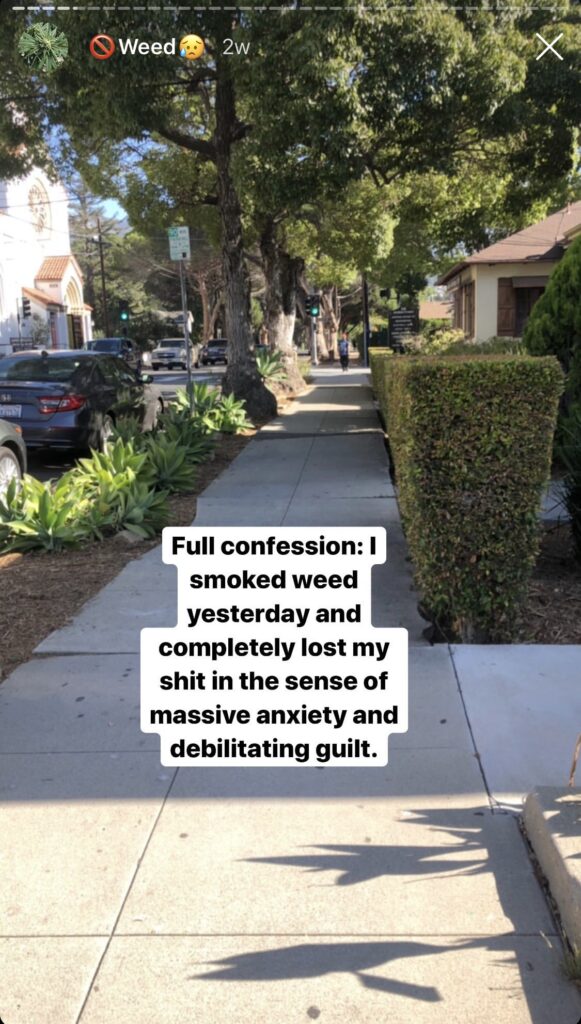 As mentioned in last week’s post (UPDATE: Last Dance with Mary Jane Continues), I’m sharing my experience at the Narcotics Anonymous meeting I attended a couple of weeks ago.

One of the members – who shall remain nameless – (see what I did there?) said, as long as I don’t mention any names, we’re good!

I should say that the reason I’m sharing is that vulnerability has become my brand, and I want to explain what it’s like to live with addiction in the way I experience it.

Below is my Instagram Story of the morning I went to NA.

I find that people are super curious as to why I quit drinking (stories are linked below), and I figured, what makes drugs any different? (Though, I’m not completely on the wagon; I like hallucinogenics every now and then. Self-destructive? Maybe. But addiction doesn’t make sense. Still, I’m navigating through.)

Believe me, I understand it can be scary to…

A. Admit you have a problem to yourself.

B. Admit you have a problem to friends or family.

C. Actually walk into a meeting.

So, I want to demystify the situation for you. Humanize it, in a way. I want to show that people who quit drinking (and those who quit doing drugs) aren’t lepers.

They’ve just recognized that drugs and alcohol do not serve them anymore, and are working hard to live a life without them.

After an argument with Chris when I lied about smoking pot, I searched for a Narcotics Annonymous meeting and found one at 10am on Sunday at 1111 Garden Street in Santa Barbara, California.

As I approached the building, I noticed a small sign out front that read, “NA in the Morning Stoners.”

A sense of humor! Thank God!

When I entered the room, I sat in an outward-facing chair against the wall. I smiled to anyone who looked my way, not sure if I should speak or if I had the right to.

(That morning, I checked online for the proper etiquette for a meeting, and the bases are for newcomers are to observe and listen, and not speak unless you are encouraged. Still, in the situation, it can be confusing. But I found out, even if you attend multiple meetings, there is no pressure to speak if you don’t want to.)

Knowing I wasn’t expected to share was another motivating factor to visit.

My feelings were so on the surface, I could barely keep it together sitting in the chair, and couldn’t imagine having to speak to the group. I’d be a total mess.

After I dabbed my eyes from listening to the opening statement, I looked around and noticed people of all varieties were in attendance. There were probably fifteen of us; Housewives, doctors, students, grandparents and everyone in between were sitting in a circle around the room.

They looked like anyone you would see on the street. Except, they admit they have a problem with drugs and are doing something about it.

The overall tone of the meeting was pretty light, considering the subject matter. There was laughter and a few tears (mostly mine). The stories were more forgiving and, what-the-hell-was-I-thinking rather than, I’m-a-terrible-person sort of thing.

I immediately felt less alone knowing there are others with same-but-different challenges, doing their best to do the best they can.

The following are notes I jotted down after listening to the opening statements and a few stories.

Note to self: I am an Addict.

“We can only keep what we have by giving it away.”

There is no known cure. We are powerless over addiction.

A disease more powerful than God’s will.

The guilt of letting people down.

Just for Today…Believe in your Sobriety.

“Principles over personalities.” According to the Sun City Area NA site, it means, “We practice honesty, humility, compassion, tolerance, and patience with everyone, whether we like them or not. Putting principles before personalities teaches us to treat everyone equally. The Twelfth Step asks us to apply principles in all our affairs; the Twelfth Tradition suggests we apply them to our relations with everyone.”

One of my favorite quotes was from the leader of the group. He said: “I love drugs, I want drugs, but I don’t need them.”

“I went from, Why Me? To, Why not me? What makes me so special that I wouldn’t struggle with this disease?”

After the opening statements, they passed around a bag of stones, each with a word written on them. The words acted as a prompt for each member to share a personal story.

The stones read that day were:

At the end of the meeting, I was called (and agreed) to lead the closing prayer. We huddled arm-in-arm in a circle. And I was told all I had to say was, “God” if I wanted.

But I went on, thanking the group for welcoming me without judgment and thanking God for allowing us to be here together. I cried, of course.

Humility mixed with acceptance mixed with empathy was something I desperately needed but didn’t know at the time.

Because I wasn’t getting empathy at home.

Chris detached from me in his anger, feeling betrayed that I had lied to him, understandably. And after the meeting, while talking with him on the phone, I realized that in order for him to remain sober from alcohol, he has to hold those strict standards for himself.

I needed love and support from my partner. It was torture for him to push me away in my vulnerable state. I couldn’t live like this. And I knew he couldn’t either.

He admitted he’d been wrong in doing so, and apologized for leaving me on the ledge. Had I not gone to the meeting, I wouldn’t have understood that empathy is what I really needed.

Addiction and recovery are a long road. And NA taught me to not be hard on myself while I’m on this journey. You fall down and relapse? It’s ok! You’re human. Just pick yourself up again.

As long as a person has the desire to quit using, they are always welcome at NA.

The last song I heard on the radio before entering the meeting was the Stone Temple Pilot’s, “Interstate Love Song”.

Any time I hear a song by STP, I think back to when I watched them from backstage at a show in Charleston, South Carolina in 2000.

As soon as Scott Weiland left the stage, he was ushered to a private car and zipped off to his own private tour bus, separate from the band. “He’s sober now,” the man standing next to me said; a memory that’s stuck with me ever since.

“Lead singer Scott Weiland wrote this song about his relationship troubles and his growing heroin addiction.

“When he wrote it, he thought about what kind of a liar he had become towards his fiancé, Janina Castaneda, and how he had promised to stay off drugs when they went to Atlanta to record Stone Temple Pilots’ second album, Purple.

“He didn’t keep that promise, but in phone calls, would tell Janina that everything was OK.”

The first song I heard on the radio after the meeting was – ironically or not ironically at this point – Third Eye Blind’s, “Semi-Charmed Life”.

According to songfacts.com: “In our interview with Third Eye Blind lead singer Stephan Jenkins, he said this song is ‘about falling apart.’

It relates specifically to a drug-induced high that makes everything fleetingly better. Said Jenkins: ‘Perfection is the moment right before gravity comes back in.

“This song describes a drug user’s descent into crystal meth addiction…Talking about the deeper meaning of the song on Reverb, Jenkins said: ‘It’s a song about always wanting something. It’s about never being satisfied and reaching backwards to things that you’ve lost and towards things that you can never get.

“I think everybody has some identification with that. The storyline between the people, the demise of this relationship, is just an extreme example of that condition. I think that’s what makes people really relate to ‘Semi-Charmed Life.'”

ANOTHER STORY FOR THE BOOKS:

I’m also including a wonderful piece written by my friend Kate Hofberg on her experience going sober for 90 days – another informative perspective on what addiction can look like. Kate wrote it while attending Boston University in 2014. Click below for her story:

What do you think? Can you relate with addiction to alcohol or drugs or know someone who can? Please, pass this on, or share your thoughts in the comments below! (Or, keep it between us by emailing meganwaldrep@icloud.com.)

In case you missed it, here’s my story with weed. I’ve also included a few about my history with alcohol, and one about my friend who committed suicide, which was fueled by addiction:

That Time I Was Drunk On A Date

Preston – A Funeral for a Friend