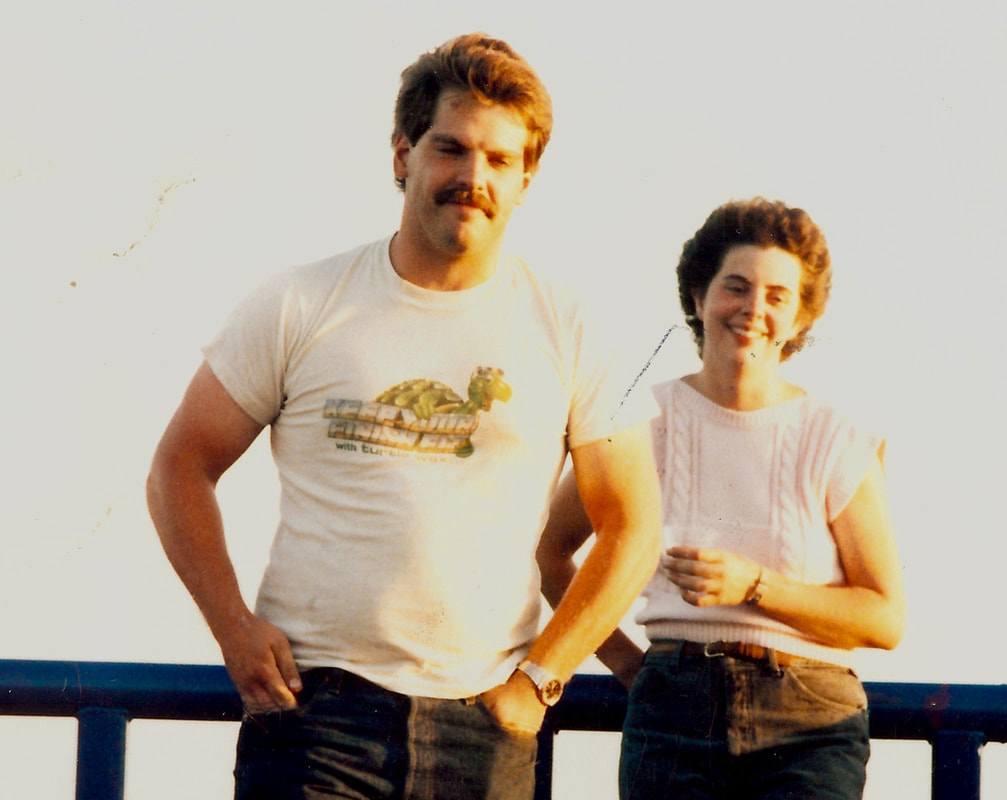 This is Part 2 of our exclusive interview with Jenny Gore Dwyer. (*Warning: you may need a tissue!) If you missed Part 1, read it here.

What were the challenges you faced when you became a partner of a commercial fisherman?

As I sit and reflect over the years about the challenges I faced as a partner of a commercial fisherman, there were definitely many. We had had a huge, huge devastating challenge six years into our business, but I’ll write about that later.

But I think the first challenge we had in the very beginning was being together. All. The. Time. Pat and I were spending an insane amount of time together – days, weeks, and months together. While it sounds like bliss, especially being newly in love and, at that time, newlyweds, there were hard days. It really set the tone for our life.

In 1985, I met Pat in Ketchikan, Alaska. We fell in love, and I moved to Seattle to be with him. We talked about plans and dreams all the time. Pat and I bought our first boat together in June of 1986. We got married seven months later, in January of 1987. The purchase of our boat was the beginning of the “together-all-the-time” life we led.

When the boat was ready, we took off for our first herring/salmon tendering season. While we had both tendered salmon separately, this was our first time working together. He, as the Captain and me, as the Cook. We had our defined roles. But when it came to merging our “land roles” of husband and wife to the “boat roles” of Captain and Cook, sometimes things got a little blurred and messy. A loud kind of messy, where, sometimes, there was shouting involved. Not only were we defining our roles, but we were also running a business. Together. On a boat. At sea. In Alaska. There was no escaping each other. Some days that was good, some days that was bad!

Those were also the days before cell phones. If you wanted to call someone to commiserate with, you only had the marine operator, and everyone could hear your conversation. Your other option was to get in line for the payphone when you were in town, where everyone could listen to your conversation. Plus, it was hard to whine and complain when you have ten people waiting to use the phone, and they can hear you! So, you learned to figure it out on the boat.

We learned to figure it out because this was our dream, our employment, and our passion. A business that was to be ours and to support our soon-to-be family. We knew the business would define who we were, and it would make us or break us. It was big stuff for a 25-year-old and a 27-year-old.

It was tricky living on the boat together for six months at a time. We shared the same stateroom with a bed that wasn’t quite big enough for the both us. Plus, Pat snored and could fall asleep in 20 seconds after he put his head on the pillow –so annoying.

Every day, as on any boat, some decisions need to be made right away. They can be critical ones or as simple as “salmon or halibut for dinner?” There was much-navigating happening, both through the Alaskan waters and within the confines of our boat. Some days, I didn’t know which was stormier.

For Pat, his decisions had to be right 100% of the time. Our success, our lives, and the lives of our crew depended on it. So, typically, his word was the end of the discussion. His word could be the end because Pat was a really, really smart guy. Instinctively, he could always make the right decision.

He could fix a toaster or a Detroit Diesel 8V71 in his sleep. He had a photographic memory for anything mechanical. In detail, he could describe how to repair engines, hydraulics, refrigeration systems, or toasters to anyone. Most of the time, he was pretty confident about everything, which led to issues when he tried to tell me he cooked bacon better than me. (See, sometimes it was the little things that could set you off!)

I can honestly tell you that led to one of the “stormiest” discussions we had. You know, because it starts out about bacon but goes downhill fast, and you end up yelling about something that happened two weeks ago!

But later that same day, the romanticism of boat life would come into play, and while we were taking fish, I’d catch Pat’s eye, and we’d lock glances for a mere second. My stomach would do flip flops. The love connection sparked across the deck, the earlier bacon discussion dissipated, and the world was right again.

As the season came to an end, we would sail out of Alaska’s waters, and then we were home in Washington for six months. Again, Together. All. The. Time. Pat’s house, the one I moved into, was 1200 square feet. Sounds pretty spacious for a first time house, right? But, 600 feet of that was an unfinished basement and a garage. So, the total living space was 600 feet. We had more room on the boat than we did at the house! Again, I know what you are thinking – cozy and fun…especially for newlyweds!

It was, but remember, we had just spent six months together on a boat in Alaska, trying to run a business (a risky one at that!), where things could be lost in an instant. Plus, we were trying to start a family, cultivate friendships, and maintain family ties. So, yes, it was sometimes messy and loud, even on land. I remember thinking soooo many times, “Married people aren’t meant to be together, 24/7!”

Somehow we managed. Somehow we grew a business, raised two of the best kids anyone could ever imagine, and had a circle of friends, family, and industry associates beyond compare.

Now, as I look back on all that “together all the time” time, now that it’s been seven years since Pat passed away from a horrible disease called ALS, I’m thankful. When Pat was diagnosed with ALS, I became his full-time caregiver. We were together again, 24/7.

I think those early boat years, that first challenge of being together all the time, set the groundwork as we faced a new horrible challenge called ALS. With ALS there aren’t a lot of answers or solutions. Once again, we had to figure it out. So looking back, I’m truly thankful for the challenges of spending So. Much. Time. Together.

I’m thankful for all the years that we were together 24/7.

I’m thankful because life can change in an instant.

Had we not spent all that time together, I would have missed out on so much of Pat’s life.

If there is one thing I regret, it’s the arguing that seems nonsensical now. I mean, really, I had to be right about the bacon?!

But I think what I’m trying to say is that life affords us the gift and challenge of time. If I can offer any advice, fight about the bacon. But then be sure to love and laugh. Remember that love connection.

In this industry, nothing is a given. The time spent with your fishing partner is your daily logbook. Fill it with messy and loud, the love and laughter and the snoring.

Even if it means you are together. All. The. Time.🐟

Jennifer Gore Dwyer is the President of St. George Marine, a Board Member of ALS Therapy Development Institute, and the author of Crabby Mama. (Photo by Caitlyn Nikula)

HOW-TO SEND A CARE PACKAGE TO YOUR FISHERMAN

A PORTRAIT OF COMMERCIAL FISHING IN AMERICA

Wendy Foster: A Fashion Icon Lets Her Guard Down