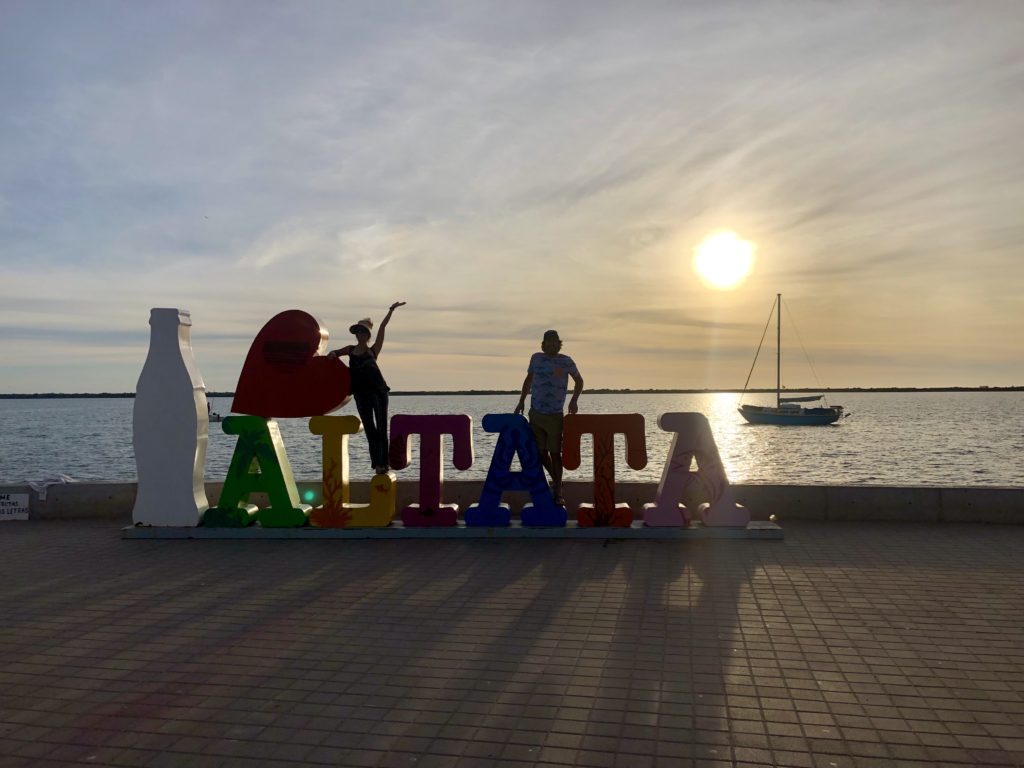 Word is, the breakwater at the entrance to Altata can be hard to navigate.

As cruisers will read in “the blue books” (also known as the sailing bibles written by Shawn & Heather and another by Rains), the channel is very shallow and can be tricky if you can’t spot the markers ahead of time.

We almost ran aground because of this.

Running aground is such an odd feeling.

As the keel slips into the muddy seafloor, the boat lurches forward in motion, similar to the tension of stretching a rubber band, before gently springing back again.

Luckily, we didn’t get stuck this time. But it was.

As we passed the breakwater, a pod of dolphins followed along, acting as a welcoming committee. Friendly fishermen waved and directed us toward the middle of the channel.

We later found out if you really need help, you can hail the port captain after 10 am and someone will tow you in.

Word on the Street

is quiet during the week yet the “” or boardwalk hosts events 52 weekends of the year. (Yep, every weekend!) Some weekends are more rowdy than others.

Just ask Charlie. The owner of, “Mi Charlie,” a restaurant on the main strip near the Altata sign. His hospitality is never-ending and he speaks wonderful English. Literally anything you want or need can be solved within a 15-second conversation with this man.

The food at his restaurant is fresh and made to order. Even the corn tortillas.

The boiled broccoli and carrots were a treat as they were the only veggies we’ve had since leaving San Carlos two weeks prior – such is a life of a cruising couple without refrigeration!

A few days later, Charlie gave us a tour of the north end of town. We passed many huge homes built on the edge of the sea with no occupants and wondered what was up.

Of course, Charlie gave us the breakdown…

He said that a hurricane hit the town four years ago (I believe it was Hurrican Sandra).

Before the storm, owners would only visit a few times a year. But afterward, the homes were left to rot.

“For Sale” signs showing two-bedroom townhomes lined the dirt road. Gated communities throughout the area had only a handful of people living in them or none at all. Charlie said home prices range from $70,000 – $105,000 U.S. and the properties include access to beautiful community pools and outdoor showers at each home. Each place has views of the ocean – even those furthest from shore by way of roof-top decks.

Rumor has it, we were only the third sailboat to come into port this year.

Which was evident when we became part of the local tours.

Tour boats full of people would creep near us to let customers peak in. So, to humor them, we’d pop on deck to smile and wave.

Until one Saturday night when things got a little too friendly.

A boatload of drunk panga fishermen actually drifted into our boat, nudging us awake at 10pm.

But they didn’t mean harm. They just wanted to party.

But once they understood we were boring Gringos, they waved to us with apologetic slurs and drifted into the night.

(By the way, the term “” means, “to bother” in Spanish. And to that word shouting from a panga outside your boat at 10 pm can be a little jarring if you know what I mean.)

I wasn’t too worried. This happened in Puerto Yavaros a few weeks prior.

Although I felt unthreatened, it didn’t stop me from laying quiet in the v-berth while figuring out an escape plan and what I could grab to kick someone’s ass if needed.

I am a woman, after all.

The next day, we decided to stay in the marina one night for a break, but mainly for the desperate need of a shower and laundry.

At that point, it had been about a week. #babywipes

Marina & Club de Yates Isla Cortés is SUPER nice. Probably one of the nicest we’ve visited in Mexico or America.

I’d come back just for the coffee.

A medium roast blend with a serving of steamed milk reminded me of a creamy delicious cup from Cafe Du Monde in New Orleans.

We took in beautiful marsh views while savoring scrambled eggs and Camarones Rancheros – a dish of sautéed shrimp with onions, peppers, salt, and fresh tomato gravy.

Raul, who manages the place, speaks perfect English and is super helpful just like Charlie. He was thrilled to have another boat in the marina and even offered to drive Chris to town for last minute supplies, which we happily accepted.

The bathroom was another experience.

Speakers pumped Spanish Top-40 dance music with bass and treble equal to any club and the large mirror was perfect to practice some moves.

Other Marina bonuses: Laundry is free, the showers are free (and pretty clean), and the water is free and potable on the dock. And the best part? Our 34’ boat cost $18 a night for a slip – including shore power. #winning

This was the break we needed. One little pampered night before another overnighter.

Next stop: Mazatlan or Bust!