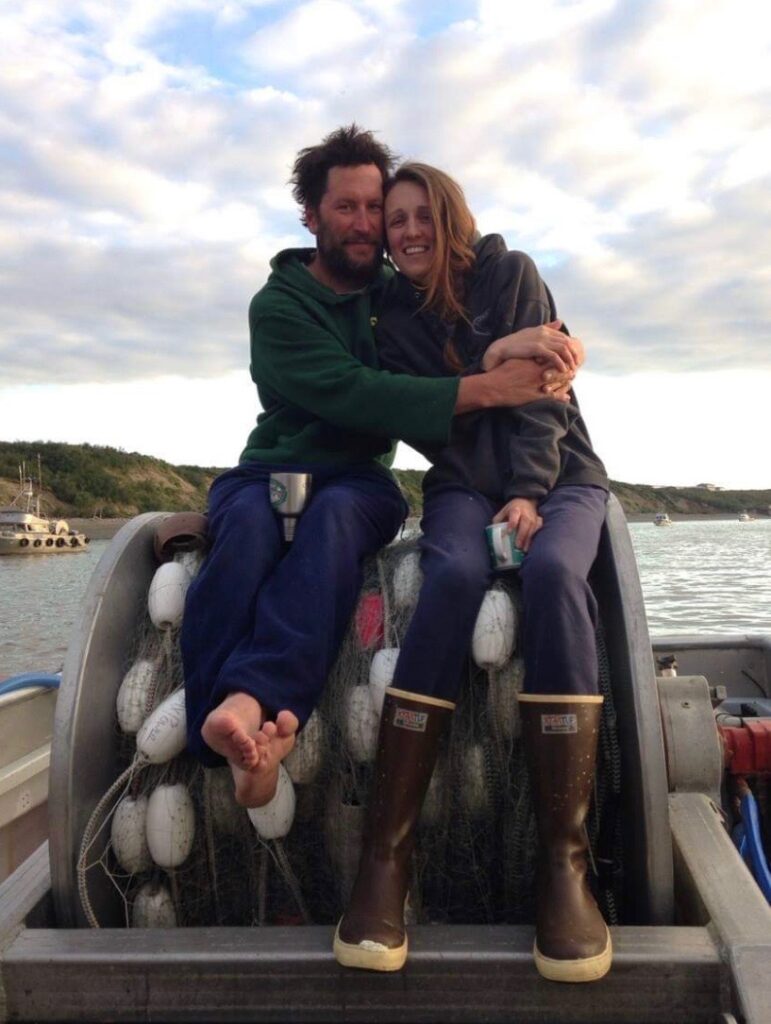 I first met Serena Dabney on New Year’s Eve in 2015. I had just started long-distance dating her brother Chris (my now-fiancé), so I flew to Washington to start the new year with my new love.

Serena humbly said something like, “I think it just seems like that because I’m in a male-dominated industry.” She had fished for about eight years at that point, and my only experience with fishing was on a jon boat in the Charleston, SC harbor with my grandfather as a kid. Well, he fished while I snacked on a bag of Oreos.

To me, Serena was a badass, whether she liked to admit it or not.

From Boat to Baby

Five years later, I found myself at her dining room table with her four-month-old baby boy, Waylon, bobbing in a bouncy chair nearby.

Bri Dwyer was there, too.

The three of us discussed what it’s like to be partners of commercial fishermen and wondered what the transition was like for Serena to go from career fisherman to a mom: How do you leave the life you’ve always known to plan for a family?

In this Q&A, Serena tells all.

How long have you commercially fished?

I started on my dad’s lobster boat in Santa Barbara, California, in my twenties, and I fished in Bristol Bay, Alaska, for ten salmon seasons.

How was it transitioning from career fisherwoman to starting a family?

(The pregnancy) took longer than we anticipated – because we needed to go the IVF route – so I had a lot of time to adjust to not fishing before we started the family.

Initially, it really was hard. It felt like a huge part of my identity was being given up for something I didn’t have waiting to replace it.

But it was something we were working towards, and that was hard. I was like, I’m not going to be a fisherman in Alaska anymore? What am I doing? Oh yeah, that’s right. I’m starting a family.

It wasn’t like I stopped fishing, and we became parents right away. I stopped fishing, then three years later, I became a mom. In that time, I made life happen down here to feel more stable and secure for a baby. I got a job working on a ferry boat and working on the water really helped fill the void of not fishing. I think it would have been harder to have just dropped it.

It’s really hard for women up there (in the Bristol Bay fishery) to be a mom. But I’ve seen moms who do it, and they’re my heroes.

I’ve also known women who had to stop because it doesn’t work to have infant baby strapped to them while picking fish. You do see moms with little kids every now and then, but you don’t see pregnant women. Or, I haven’t seen pregnant women. It’s a really difficult place to be in the beginning stages of motherhood. It’s definitely a place that families can go, especially if you set net rather than gill net. But there are not that many of them because the climate is a little harsh.

Commercial fishing is a male-dominated industry across the board. Fishing is so uncertain. You don’t know what’s going to happen when you go out there. It also takes a lot of physical work, and women tend to be needed at home.

I think there’s a lot of other fisheries in the world where women can find more balance. Like, lobster fishing on the East Coast where you get up early and do your thing. It’s like going to a job and coming home every night versus going to remote Western Alaska for months at a time.

For me, I needed to not fish anymore to make space in my life for a family.

So, even though it’s 2020 and we have the same opportunities, for the most part, it’s still really the men that are working on those crabbers and saying goodbye for the winter or sailing off for 3, 4, or 6 months. It’s easier for men to pick up and leave because women are expected to be the number one caregivers.

Do you know women who have come back to fishing after having babies?

I know some that make it a family affair with their husbands and kids, when the kids are big enough to participate.

What is it like to go from fisherman to a partner of a commercial fisherman and being the one staying behind while he goes off?

I’m totally mixed. Because for a long time, and still, when I hear the exciting stuff, I really miss it. Like the big catches, the beautiful days, and the forever sunsets. (Due to the latitude of Alaska, twilight can end after midnight).

I really miss the thrill of it all. But the grind of it all – like 40-knot days at Johnson Hill, trying to sleep and rolling out of my bunk, fifteen-hour openers, and scratch fishing – makes me happy to be home. (“Scratch fishing” is when fish haven’t shown up at the beginning of the season or very little are coming through at the end of the season, resulting in a few fish on the net in each set.)

It’s also nice because I speak the same language, so for me, I can get right in there and talk to (other fishermen) about all of it. I still understand what’s going on, so that part makes it easier because it’s something I’ve experienced.

Being with a commercial fisherman now makes me miss it but also grateful for it. It’s a double edge.

Are you a mom who once commercially fished? What was the transition like for you? Please share in the comments below!

Curious about what it’s like for others to date a commercial fisherman? Catch up on the series:

IF YOUR LOVED ONE IS A COMMERCIAL FISHERMAN, JOIN THE PRIVATE GROUP HERE!

What to Expect When Flying During a Pandemic