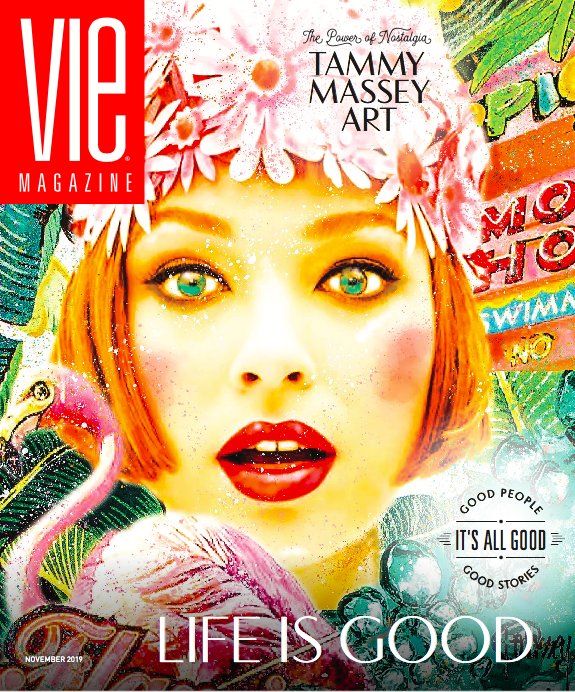 How would it be if we met our neighbors with the same spirit of curiosity we have when traveling abroad? What if we were willing to learn what others think and feel without judgment or fear? Visiting Bitty & Beau’s Coffee isn’t a trip to Europe, yet the experience will leave you with a meaningful and lasting impression that no historical structure, cherished piece of art, or rare vintage wine can replicate. In a simple yet profound way, one cup of coffee at Bitty & Beau’s can change your life for the good.

“Good Morning! Welcome to Bitty & Beau’s!”, a greeting that echoes many times in the two-story, black and white space of the Wilmington, North Carolina location. What makes Bitty & Beau’s Coffee unique are it’s employees – almost all hires are adults with intellectual and developmental disabilities (or IDD). By creating jobs for adults with IDD, Bitty & Beau’s Coffee becomes a conduit for change not only for their hires, but through challenging social norms of how we value, accept, and interact with other people.

Wife and husband team Amy and Ben Wright, both with backgrounds in show business, traded scripted film for an unscripted life when they moved to Wilmington, North Carolina to start a family. Daughters Lillie and Emma Grace were born before welcoming their son Benjamin Jr. (Beau), and five years later, a baby girl, named Jane (nicknamed, “Bitty”). With their youngest children both born with IDD, the Wright’s were thrust into a world that many outsiders don’t understand and, until then, the Wright’s didn’t really understand either. 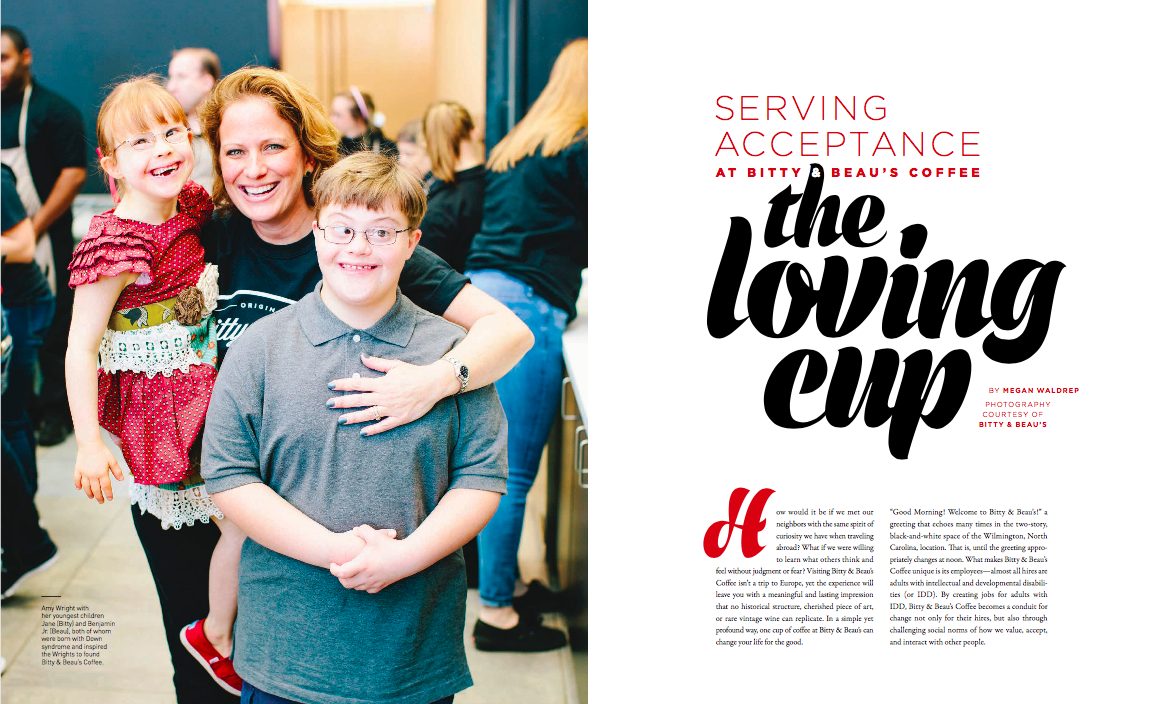 What they discovered was that less than twenty percent of adults with IDD have jobs, and the rest are left without many options. Wanting more for their children, the Wright’s opened a five-hundred square foot coffee shop in 2016 and hired nineteen highly capable adults, aptly naming the business, Beau’s Coffee. “We don’t want people to come in and leave and go, ‘Man, they totally figured it out — people with IDD can work in coffee shops,’” Ben Wright has said. “What we want to show is that people with IDD can be interacted with and do a good job and be part of a viable business. And if you can get businesses to just begin to tuck in one or two people [with IDD], you start to have a substantive impact on the unemployment rate. You can change the culture.” With customer lines wrapping the building within the first six months of business, the Wright’s searched for a new space and eventually found one through a few admiring neighbors; the family owners of a local Cadillac dealership were so moved by the Wright’s mission, they donated their former Hummer dealership building for the new Beau’s Coffee shop. Five hundred square feet became five-thousand, which features a roasting room, a variety of tables and seating (including a community table), administrative offices, a kitchen, and a cozy library section with couches to enjoy an afternoon with friends. But Beau made one change to make the business complete. For his birthday, he requested that his sister’s nickname be added to the company, too. 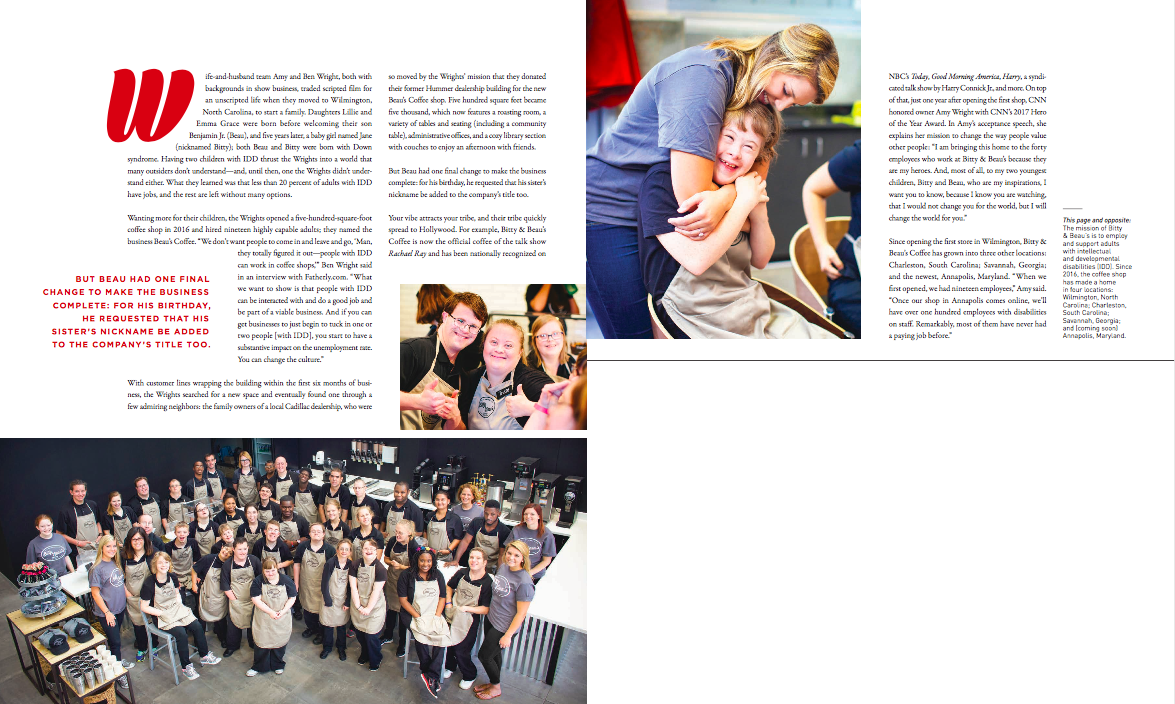 Your vibe attracts your tribe, and their tribe quickly spread to Hollywood. For example, Bitty & Beau’s Coffee is now the official coffee of the Rachael Ray Show and has been nationally recognized on the Today Show, Good Morning America, and Harry, a syndicated talk show by Harry Connick, Jr. to name a few. Just one year after opening the first shop, CNN honored owner Amy Wright with CNN’s 2017 Hero of the Year Award. In Amy’s acceptance speech, she explains her mission to change the way people value other people: “I am bringing this home to the 40 employees who work at Bitty & Beau’s because they are my heroes. And, most of all, to my two youngest children, Bitty and Beau, who are my inspirations, I want you to know, because I know you are watching, that I would not change you for the world, but I will change the world for you.”

Since opening the first store in Wilmington, Bitty & Beau’s Coffee has grown into four locations including Charleston, South Carolina; Savannah, Georgia; and the newest in Annapolis, Maryland. “When we first opened, we had nineteen employees,” Amy said. “Once our shop in Annapolis comes online, we’ll have over one-hundred employees with disabilities on staff. Remarkably, most of them have never had a paying job before.” If you know someone who would like to be a part of the Bitty & Beau’s Coffee community, you’re in luck. “We’re always looking for great people to join our team. Anyone with a great attitude and willingness to learn new things is a perfect fit for us,” Amy said. “We look at someone’s skillset, figure out what they’re good at, and plug them in! We believe everyone deserves a chance at meaningful employment.” When asked why the Wright’s chose Annapolis for the next location, Amy reflects back with enthusiasm. “We’ve found great success in Wilmington, Charleston, and Savannah due to wonderful community support and high tourist traffic. We’re hoping to capture both in Annapolis, too,” Amy said. “And we love the idea of expanding to the North and reaching more people with our mission!” 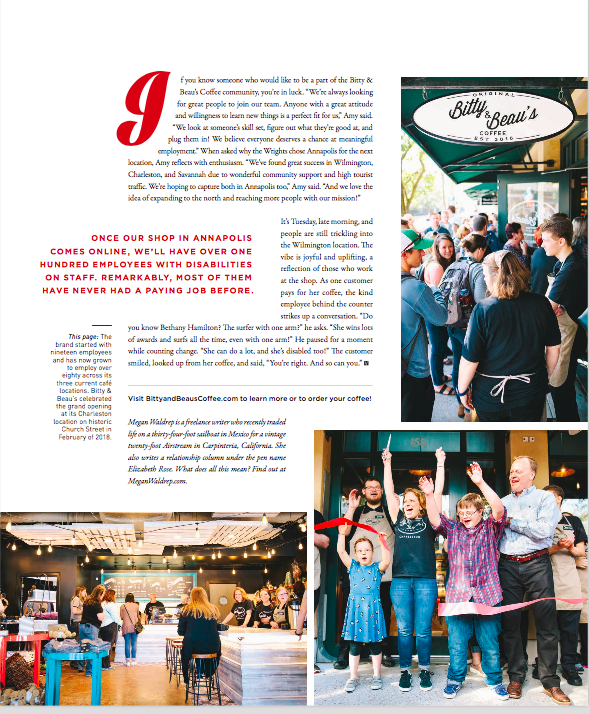 It’s Tuesday, late morning, and people are still trickling into the Wilmington location. The vibe is joyful and uplifting, a reflection of those who work at the shop. As one customer pays for their coffee, the kind employee behind the counter strikes up a conversation. “Do you know Bethany Hamilton? The surfer with one arm?” he asks. “She’s disabled, too, and she wins a lot of awards, even with one arm!” He paused for a moment while counting change. “She’s so strong and can do so much.” The customer smiled, looked up from her coffee, and said, “You’re right. And so can you.”