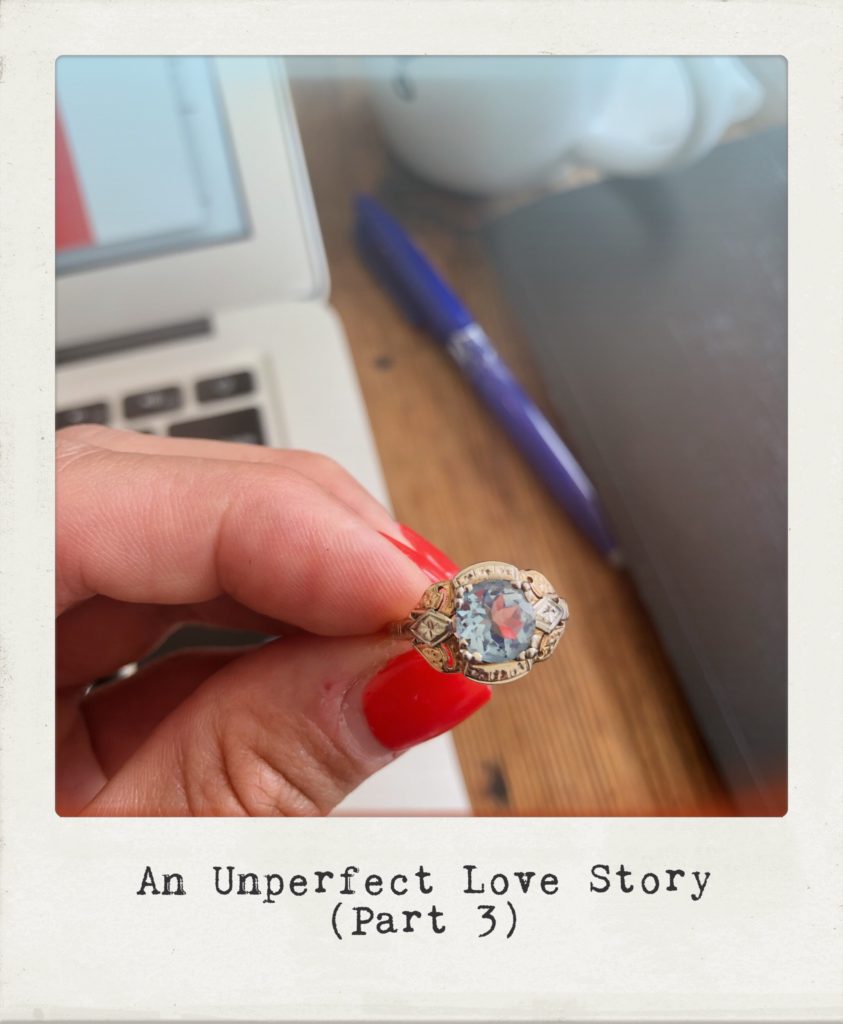 What’s with the Ring?

At this point in the story, Chris and I had seriously talked about getting engaged for five months, and I often wondered why I wanted to get married in the first place.

Especially, “in these modern times.”

Especially, since we don’t want kids.

The inspiration for this piece started many miles ago, quite literally, since the question arose before our road trip from Bellingham, Washington in November of 2018 and was finished during our three-month sailboat cruise along the Mexican coastline in March of this year. For example, the three women mentioned in the story I met while on the road in Washington and California, and while sailing in Mexico.

(Fun Fact: After I wrote the column, I read it aloud for the first time in the La Cruz Writer’s Group in La Cruz, Mexico, and my fellow seafaring writers helped me tighten it up. Thanks, guys – Fair winds and following seas!)

It’s interesting how definable marriage is, yet can be somewhat indefinable as each person tries to put their finger on it. (No pun intended.) And my reason may surprise you; I’ve gotten reactions ranging from “hell yeah'” and other’s that look at me like I’m a space alien.

I’m curious, what do you think about marriage? Was it something you and your partner discussed beforehand or was it a surprise? If you’re divorced, how have your feelings changed? If you’ve never married, how does marriage make you feel? We would love to hear your thoughts! Please reply in the comment section below!

Published in the Santa Barbara Sentinel as, “What’s With the Ring?” in March 2019.

(Friendly reminder: I write under the pen name, Elizabeth Rose and my fiancé Chris is known as “Jason” in the I Heart stories.)

I want to get married and some of my California friends wonder why.

I blame my family. The strongest relationships I grew up around were married couples.

So, no matter how long I live on the West Coast, consuming Reishi mushroom tea and açai bowls, I’m still a traditional girl at heart.

Because marriage, to me, means security.

That you’re wanted and desired.

It means you both chose each other over everyone else in the world. And as far as your love life is concerned, you’ve got that part figured out.

Of course, this isn’t always the case.

As a woman in her late thirties, I have enough experience to know the risks involved when committing to another.

Then, the give-and-take begins.

How much are you willing to compromise? What sacrifices are at stake?

I recently spoke with three women about marriage. Two in relationships, all with careers.

The first, a single woman in her early thirties, could take marriage or leave it.

“Sounds pretty archaic to be ‘owned’ by another, don’t you think?” she said. “But if the relationship goes down that road, I don’t know…it just depends on the person I meet.”

The second woman, about thirty-four, had been with her partner for over seven years and was in the midst of In vitro fertilization when he proposed.

“Honestly? I don’t care about a wedding,” she said. “I just wanted the ring.”

To her, In vitro didn’t mean total commitment.

The third woman, in her late twenties, said the same thing.

She doesn’t want a legal union but went on to explain a pretty memorable event including a ceremony in front of family and friends with maybe a few monetary kickbacks thrown in.

And to be clear, it isn’t a diamond the last two women are after.

Millennial women are paving a new path, just as generations have before.

But instead of saying, “I do,” commitment now exists in the form a shiny metal band.

It seems the modern woman is more interested in a committed relationship than actually making it official.

Maybe with high divorce rates in our country, the word “marriage” to some women means there will be an end.

So, instead of throwing out the concept all together, they’re redefining a committed relationship to fit their taste.

Something less intimidating but with the same bells, whistles, and Instagramable moments involved.

And if it’s commitment they’re after, instead of a white wedding, isn’t that more meaningful?

The other night, Jason and I were in the galley of our sailboat. He was texting with a high school friend who now lives in Puerto Vallarta.

“I’m excited to introduce you to him,” he said, “as my beautiful girlfriend, soon-to-be wife!”

My heart melted yet a wave of nerves hit me all at once.

Although we’ve discussed marriage many times (and he’d already asked my father for my hand in marriage), hearing the word “wife” made it hard to swallow.

Maybe my friends’ non-committal vibe was rubbing off on me after all.

I see marriage similar to a business contract and the ring, a down payment.

I need to be sure the other party is equally at risk before investing more time, money, and work (both emotional and physical) into a future together.

After a certain point in your adult life, you’ve got to put your heart aside and use your head.

And as unromantic as it sounds, you eventually learn that romance in an intimate relationship becomes merely incidental.

The day I met Jason, my life completely altered to include another, which turned out to be a great adventure and learning experience all its own.

Though being with Jason is something I want, I can’t help but feel a little nostalgic.

I think back to my single days when I dated men of all ages and learned so much about myself in the process – my dislikes, and more importantly, how I wanted to evolve.

In a way, I miss the time when the path of a committed relationship had yet to be traveled.

But I find myself in a similar space again.

In an area in our relationship that has yet to be defined.

Where the terms “husband and wife” do not exist and the delicate space on my ring finger remains untouched and unclaimed, save only for me.

That time I learned to make tortillas in Mexico. Our sailboat was anchored in Agua Verde, and once we rowed to shore, this happened.

Conscious Coupling: Jason & I Get Engaged!