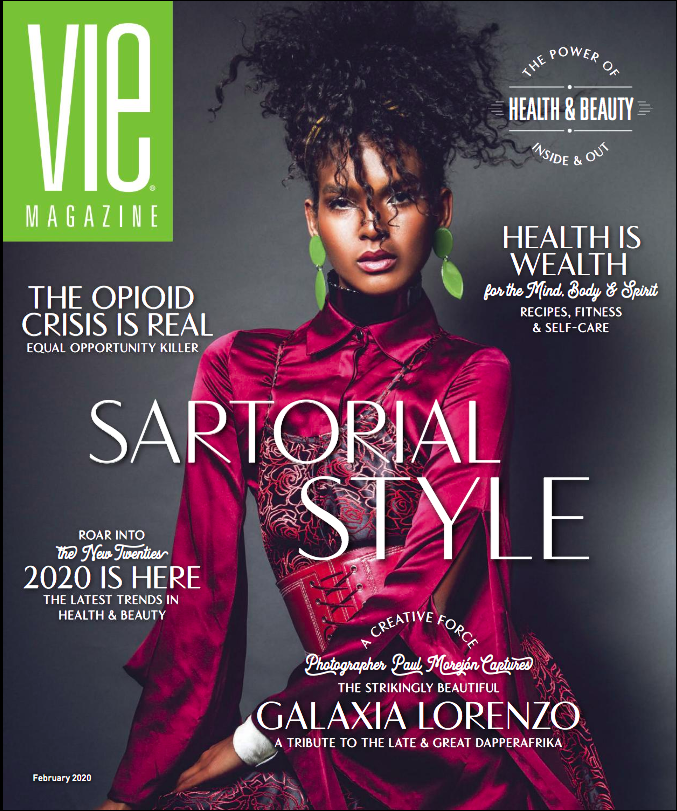 Autumn Shelton smiles from the entrance of a cannabis farm with a perfectly round pregnant belly. She’s two months shy from giving birth but four years into a partnership with Autumn Brands, a Santa Barbara County licensed cannabis cultivator in the foothills of Carpinteria, California. A pregnant woman actively working in the industry may seem out of place, but it’s completely safe to be around the fragrant herb. She explains that the principal psychoactive component of cannabis, known as Tetrahydrocannabinol or THC, isn’t activated unless heated or processed, thus debunking the first of many myths surrounding the newly legal plant. She, alongside Hanna Brand, makes up fifty percent of the women-owned business, while Hanna’s father and mother, Hans and Ester, own twenty-five percent, as does her brother, Johnny.

Cannabis wasn’t their first intention. The Brands have a long history of flower cultivation, dating back over a century of growing high-quality tulips in Holland. When the Brands moved to America in 1986, the family established B&H Flowers, hired Autumn as CFO, and grew Gerbera, Dianthus, and Hydrangea, among other varieties. Years later, when a free trade agreement weakened the domestic flower industry, Hans urged Autumn to research cannabis with hopes of including his children in a new business model. After reviewing excessive regulations – much stricter than farming or flower cultivation – Autumn discovered they had the resources to legally grow marijuana for medicinal use. Once Hans gave the green light, the new company, Autumn Brands, transformed the flower farm into pristine cannabis growing facility. This was a trend for many local farmers when recreational use became legal in 2018. Though many growers had never tried cannabis, including Hans, high demand for the controversial plant meant cannabis was the new cash crop. With greenhouse infrastructures already in place and agricultural experience well in hand, the Carpinteria Valley, once known as the “Flower Basket” of the nation, quickly turned into one of the top-producing cannabis regions in the state. The switch benefitted both producers and workers with health benefits, safer working environments, and higher wages to the point where employees can now afford to live in the California beach town. Autumn Brands has set a high-quality standard for their cannabis-growing neighbors, even showing appreciation to employees through monthly barbecues to honor birthdays. “You know, you spend most of your day at work,” Hanna Brand said. “And to see people making good money and enjoying being here feels really good.” 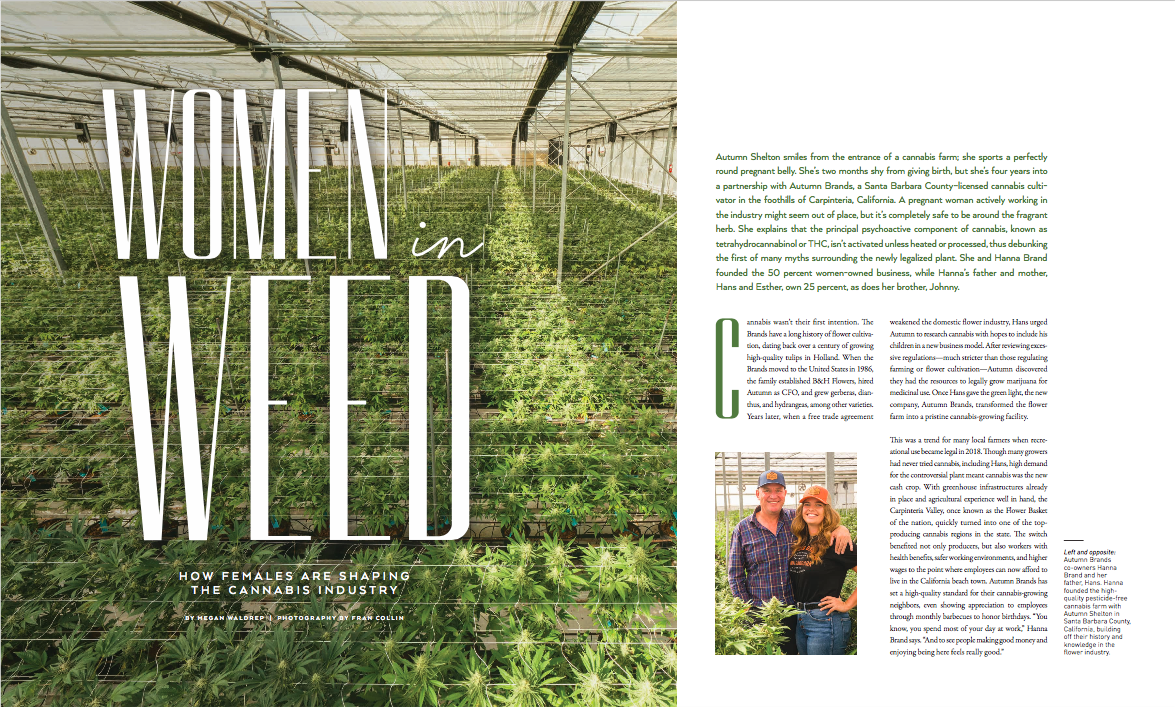 The company is also a member of CARP Growers (Cannabis Association for Responsible Producers), a group whose mission is to promote responsible cannabis practices in the area. In order to become a member farm, requirements include current licensing and compliance with all state and county regulations, water conservation practices, fair labor practices, chemical-free pest control, and association dues which go towards local charities. (As a whole, CARP Growers has donated hundreds of thousands to the community thus far.) Even still, not everyone is a fan of the industry. Many locals complain of the smell, which can be quite potent at times. But members of CARP Growers have negated this issue through odor abatement systems, systems that launch vapors infused with essential oils into the same air currents as odor-producing terpenes found in cannabis during the flowering stage, thus changing the chemistry enough that the human brain no longer detects it as smell. How’s that for science? The aroma locals currently smell come from farms that are non-compliant.

Opportunities for women in cannabis are limitless; the new profession means an even playing field and no glass ceiling. “There are so many different products and affiliated companies that women, whether in creative or executive roles, can provide innate key abilities to grow successful companies,” Autumn said. “Women want the best quality products. So choosing a cannabis product that is pesticide free, and crafted by women is very important.” For Autumn Brands, their employee ratio is around fifty-percent female, and pesticide-free means ladybugs keep small-scale insects at bay. 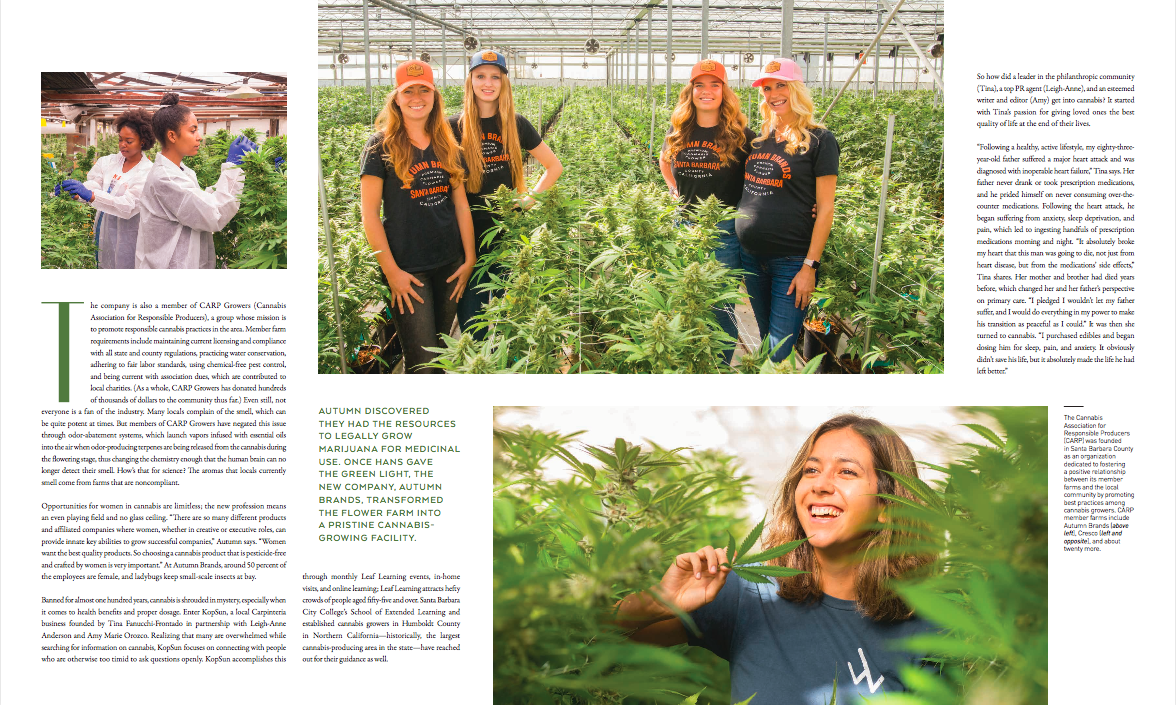 Banned for almost one hundred years, there are many mysteries surrounding cannabis, especially the health benefits and proper dosage. Enter KopSun, a local Carpinteria business founded by Tina Fanucchi-Frontado in partnership with Leigh-Anne Anderson and Amy Marie Orozco. Realizing that many are overwhelmed while searching for information on cannabis, KopSun focuses on connecting with people who are otherwise timid to openly ask through monthly events, in-home visits, and online learning. Aside from “Leaf Learning” events, which attract hefty crowds in age groups of fifty-five plus, the Santa Barbara Community College Adult Education Department and established cannabis growers in Humboldt County in Northern California – historically the largest cannabis-producing area in the state – have reached out for their guidance as well.

So how did a leader in the philanthropic community, a top PR agent, and an esteemed writer and editor get into cannabis? It started with Tina’s passion to give loved ones the best quality of life at the end of their lives. “Following a healthy, active lifestyle, my eighty-three-year-old father suffered a major heart attack and was diagnosed with inoperable heart failure,” Tina said. Her father never drank or took prescription medication and prided himself on never consuming over-the-counter medications. Following the heart attack, he began suffering from anxiety, sleep deprivation, and pain which led to ingesting handfuls of prescription medications morning and night. “It absolutely broke my heart that this man was going to die, not just from heart disease, but from the medication’s side effects,” Tina said. Her mother and brother had died years before, which changed her and her father’s perspective on primary care. “I pledged I wouldn’t let (my father) suffer, and I would do everything in my power to make his transition as peaceful as I could.” It was then she turned to cannabis. “I purchased edibles and began dosing him for sleep, pain, and anxiety. “It obviously didn’t save his life but absolutely made the life he had left better.” 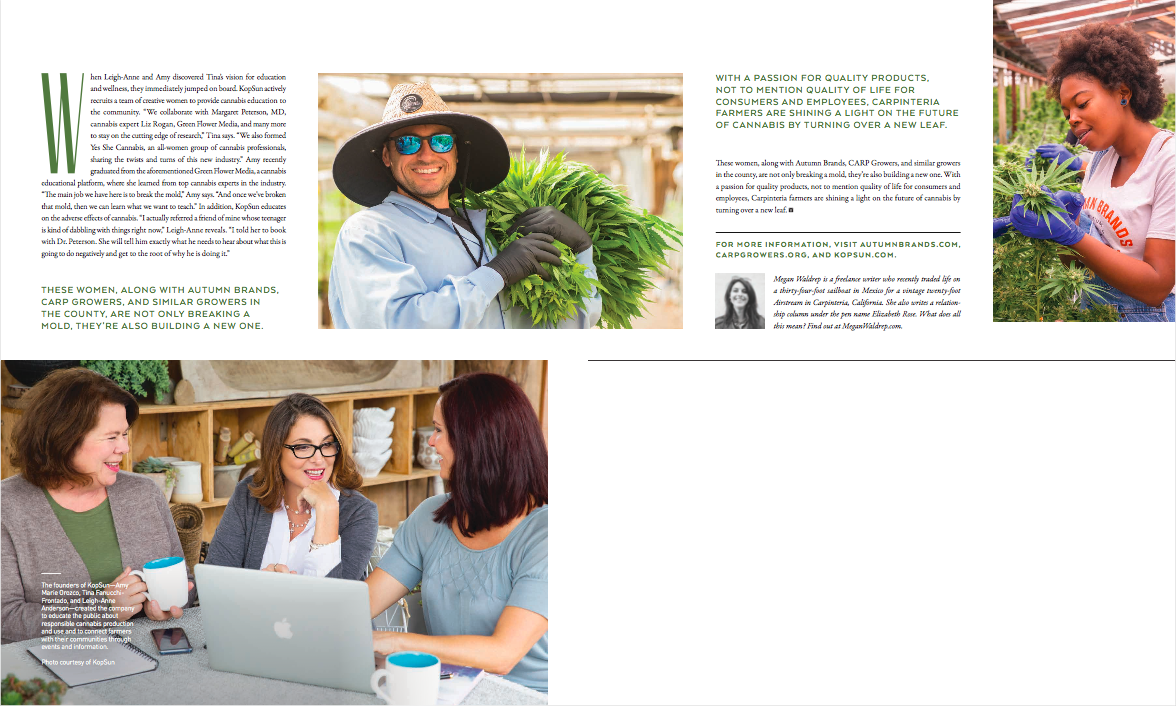 When Anderson and Orozco discovered Tina’s vision for education and wellness, they immediately jumped on board. KopSun actively recruits a team of creative women to provide cannabis education to the community. “We collaborate with Margaret Peterson M.D., cannabis expert Liz Rogan, Green Flower Media, and many more to stay on the cutting-edge of research,” Tina said. “We also formed ‘Yes She Cannabis,’ an all-women group of cannabis professionals, sharing the twists and turns of this new industry.” Orozco recently graduated from the aforementioned Green Flower Media, a cannabis educational platform, to learn from top cannabis experts in the industry. “The main job we have here is to break the mold,” Orozco said. “And once we’ve broken that mold, then we can learn what we want to teach.” In addition, KopSun educates on the negative effects of cannabis. “I actually referred a friend of mine whose teenager is kind of dabbling with things right now,” Anderson said. “I told her to book with Dr. Peterson. She will tell him exactly what he needs to hear about what this is going to do negatively and get to the root of why he is doing it.”

These women, along with Autumn Brands, CARP Growers, and similar growers in the county, are not only breaking a mold, they’re also building a new one. With a passion for a quality product and quality of life for consumers and employees, Carpinteria farmers are shining a light on the future of cannabis by turning over a new leaf.

3 Easy Steps To Get Your Writing or Product Published