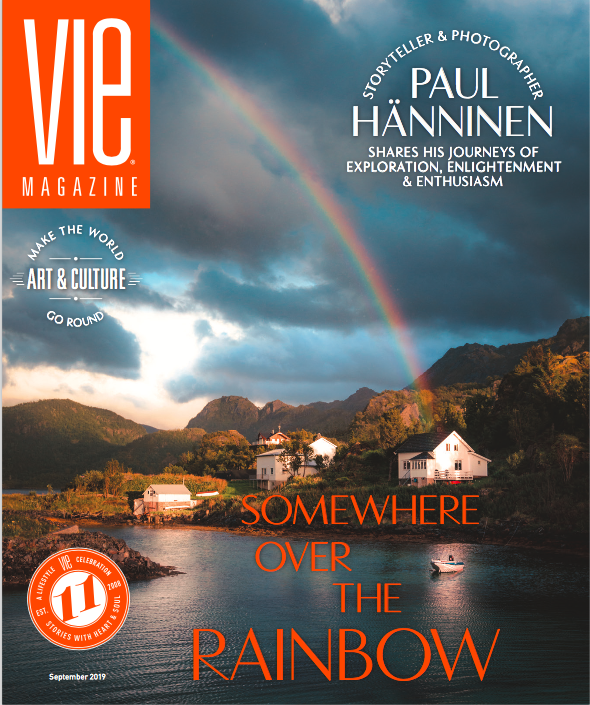 Marcos Galindo sat on the couch with a new public policy degree in one hand and his head in the other. Dreams of making a positive impact on his native Mexico were shattered with a taste of the political world in college. But, encouraged by his father to take the next step, Marcos applied to the PhD program at the London School of Economics and Political Science and got in. So, to help his son earn savings during the six-month interim, his father bought land in Colima, Mexico to turn into a farm. It was then Marcos discovered the education he was looking for wouldn’t come from a notable University. It would come from the ground on which he stood.

“I fell in love with the rural work,” Marcos said, gesturing out the window of his SUV. “I literally called my dad three-months in and said, ‘Dad, this is what I love. I get to wake up very early and organize the people, have lunch and coffee with them, go to work, and try to make an impact in these people’s lives.’” Needless to say, Marco never went to London. Instead, he grew the farm into a business, employed one hundred fifty employees, became organic and fair trade certified, and exported papayas and limes to major retailers, like Whole Foods. But with growth came more responsibility and for a year Marcos lived in Texas to manage the business side, away from his wife and two kids – he now has three children under the age of seven – and far from the impactful one-on-one work he longed for. Once again, it was time to pivot. He and his wife agreed to sell the business and Marcos, along with his father, turned a sleepy lumber mill into a stunning hacienda mountain oasis. Finally, the cultural and economic project he longed for had a place to exist. And this was just the beginning. 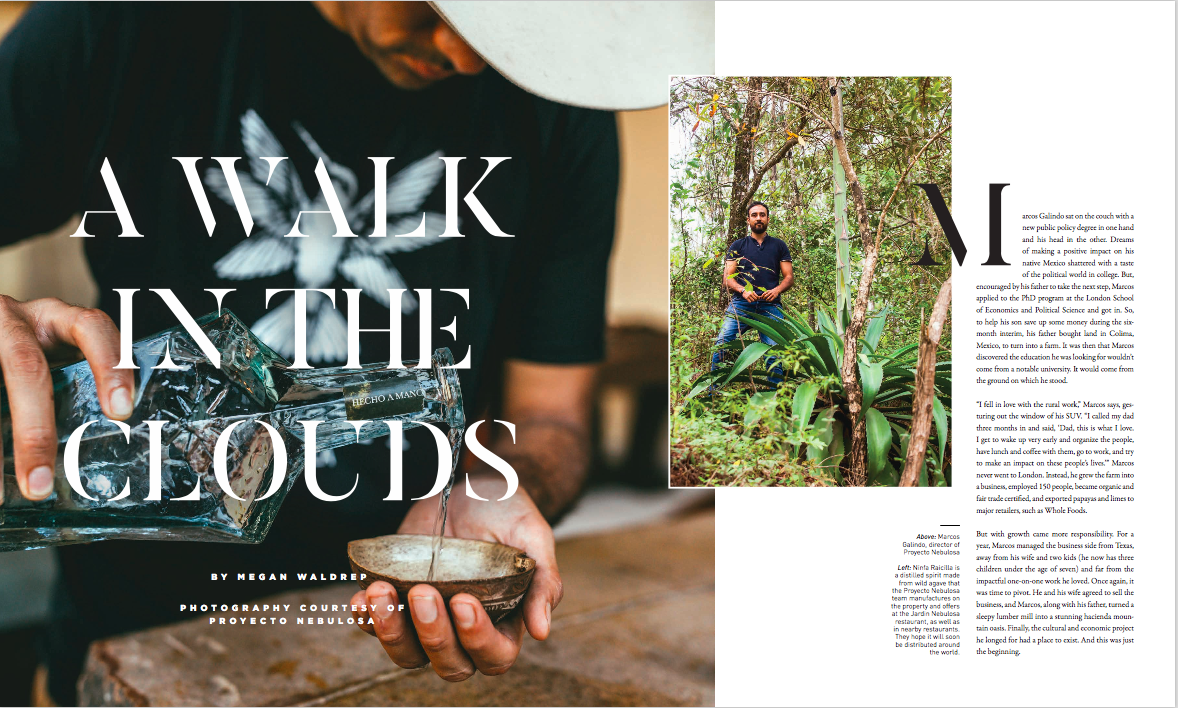 Marcos navigates four of us up a remote muddy road and further into the Sierra Madre Occidental Mountains in Western Mexico. He’s taking us to a secret hacienda set inside a cloud forest. So secret, in fact, at the time of writing it had yet to be publicized in the United States. We soon discovered that a cloud forest is just as enchanting as it sounds. Only one percent of the forests in the world can claim this title. And with little exposure to wind or sun, the clouds tend to hang around the tree canopy level, creating enough moisture to sustain an impressive variety of life in one small area. Think tall trees with moss, air plants, orchids, and wild ferns growing on them, and a place that jaguars, pumas, and endangered species call home.

“This is my heritage,” Marcos said. “I’m not a historian, I am a sociologist. And as a sociologist, I know the problems in my country.” One problem, he explains, is that there are stretches of land and people in Mexico that are forgotten in terms of government support. But traveling to these remote communities, Marcos knew their abilities and what they aspired to build. It was then he questioned how to integrate agricultural work to increase their quality of life. “It’s like finding a black truffle in the forest, but here, they sell the liquid for five dollars a bottle on the side of the road,” Marcos said. “This is when the new generation has to do something about it because (in Europe), black truffles can sell for a thousand dollars a kilogram, and here, they have something more valuable, but they don’t know how to sell it.” 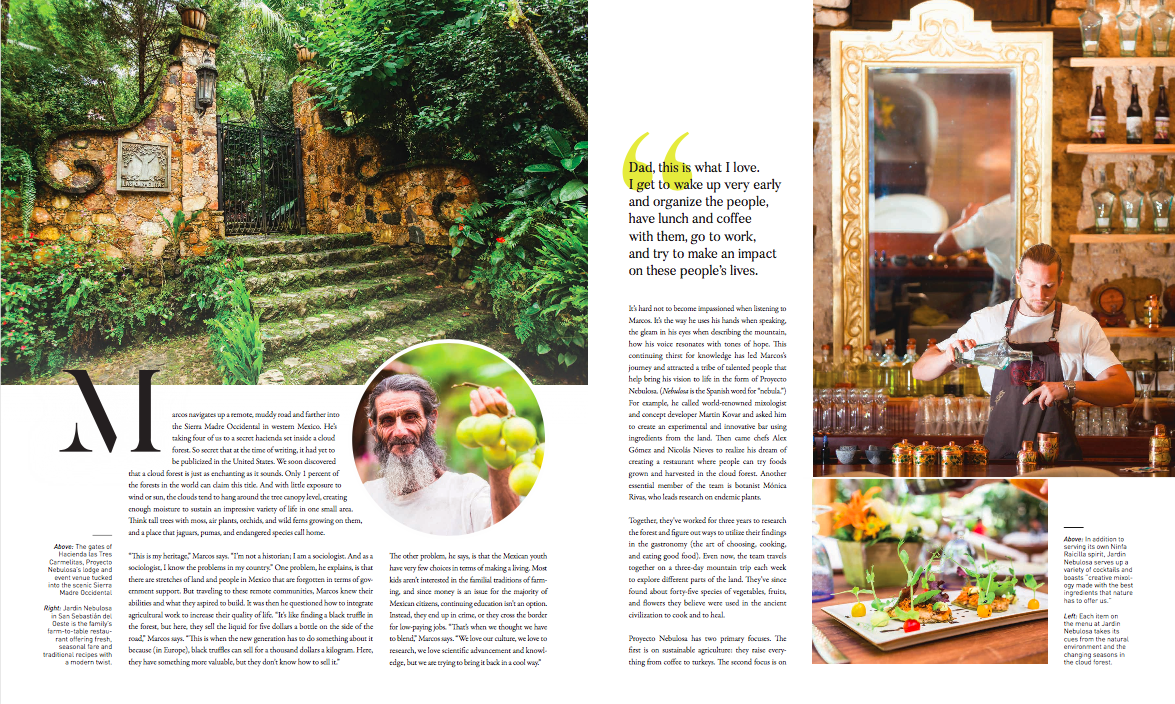 The other problem, he says, is that the Mexican youth have very few choices in terms of making a living. Most kids aren’t interested in the familial traditions of farming, and since money is an issue for the majority of Mexican citizens, continuing education isn’t an option. Instead, they end up in crime or cross the border for low paying jobs. “That’s when we thought, we have to blend,” Marcos said. “We love our culture, we love to research, we love scientific advancement and knowledge, but we are trying to bring it back in a cool way.”

It’s hard to no become impassioned when listening to Marcos. It’s the way he uses his hands to conduct his speech, the gleam in his eyes when describing the mountain, how his voice resonates with tones of hope. This continuing thirst of knowledge has led Marcos’ journey and attracted a tribe of talented people that help bring his vision to life in the form of Project Nebulosa. (“Nebulosa” is the Spanish word for cloud.) For example, he called world-renowned mixologist and concept developer, Martin Kovar and approached him to create an experimental and innovative bar using ingredients from the land. Then came chefs Alex Gomez and Nicolás Nieves to realize his dream of creating a restaurant where people can try food grown and harvested in the cloud forest. Another essential member of the team is Botanist Monica Rivas who leads research for endemic plants. Together, they’ve worked for three years to research the forest and figure out ways to implement their findings in gastronomy (or, the art of choosing, cooking, and eating good food). Even now, the team travels together on a three-day mountain trip each week to explore a different part of the land. They’ve since rescued about forty-five species of vegetables, fruits, and flowers they believe were used in the ancient civilization to cook and to heal.

Project Nebulosa has two major focuses: One, in sustainable agriculture where everything from coffee to turkeys is raised there. The second focus is discovering ways of teaching local communities how to preserve ancient agricultural traditions in order to build a higher quality of life. As if this wasn’t enough, they’ve created Nebulosa Camp which includes fifty kids from the local communities. One month each year, Marcos and the team chooses ten of the most committed students and brings them to the hacienda to teach them chemistry through beer brewing and distillation process, marketing and storytelling, gastronomy, botany, wildlife, and more. There’s even a botany professor from Brandon University in Canada who is working to send his master’s degree students to do scientific research with Project Nebulosa.

With a simple dream to make a difference, Marcos and team lead by example rather than ego, think globally yet act locally, and have created a place where living off the land results in the advancement for every person involved. “When I bring my kids, and they see what we’re doing, that’s when I know we made the right choice,” Marcos said. “It’s not about money. It’s about continuing tradition.” 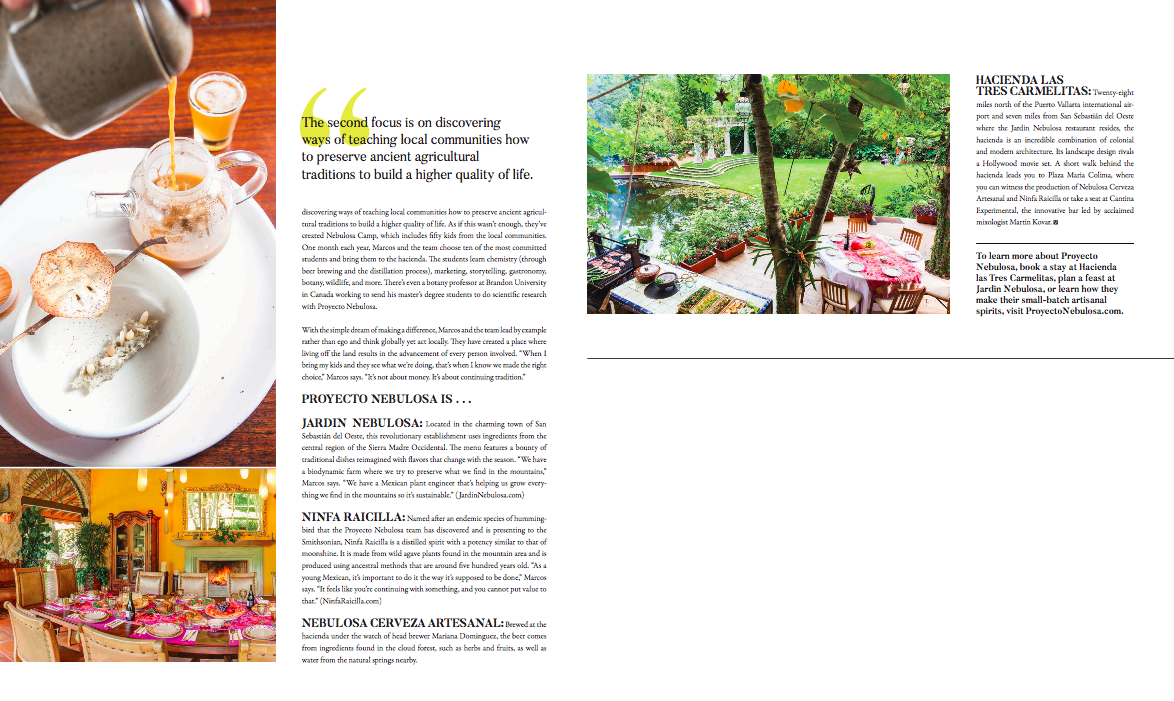 Jardin Nebulosa: Located in the charming town of San Sebastian del Oeste, this revolutionary establishment uses ingredients from the central region of the Sierra Madre Occidental Mountains. The menu hosts a bounty of traditional dishes reimagined with flavors that change with the season. “We have a biodynamic farm, where we try to preserve what we find in the mountain,” Marcos said. “We have a Mexican plant engineer that’s helping us grow everything we find in the mountain so it’s sustainable.” (www.jardinnebulosa.com)

Ninfa Raicilla: Named after an endemic hummingbird the Project Nebulosa team has discovered and is presenting to the Smithsonian museum, Ninfa Raicilla is a distilled spirit with a similar potency of moonshine. It is made from wild agave plants found in the mountain and is produced using ancestral methods up to five-hundred years old. “As a young Mexican, it’s important to do it the way it’s supposed to be done,” Marcos said. “It feels like you’re continuing with something and you cannot put value to that.” (www.ninfaraicilla.com)

Nebulosa Cerveza Artesanal: Brewed at the hacienda under the watch of head brewer Mariana Dominguez, the beer is made from ingredients found in the cloud forest such as herbs and fruits as well as water from the natural springs nearby.

Hacienda Las Tres Carmelitas: Twenty-eight miles north of the Puerto Vallarta international airport and 7 miles from San Sebastián del Oeste where the Jardin Nebulosa restaurant resides, the hacienda is an incredible combination colonial and modern architecture and landscape design that rivals a Hollywood movie. A short walk behind the hacienda leads you to Plaza Maria Colima where you can witness the production of Nebulosa Cerveza Artesanal and Ninfa Raicilla or take a seat at Cantina Experimental, the innovative bar led by acclaimed mixologist, Martin Kovar.