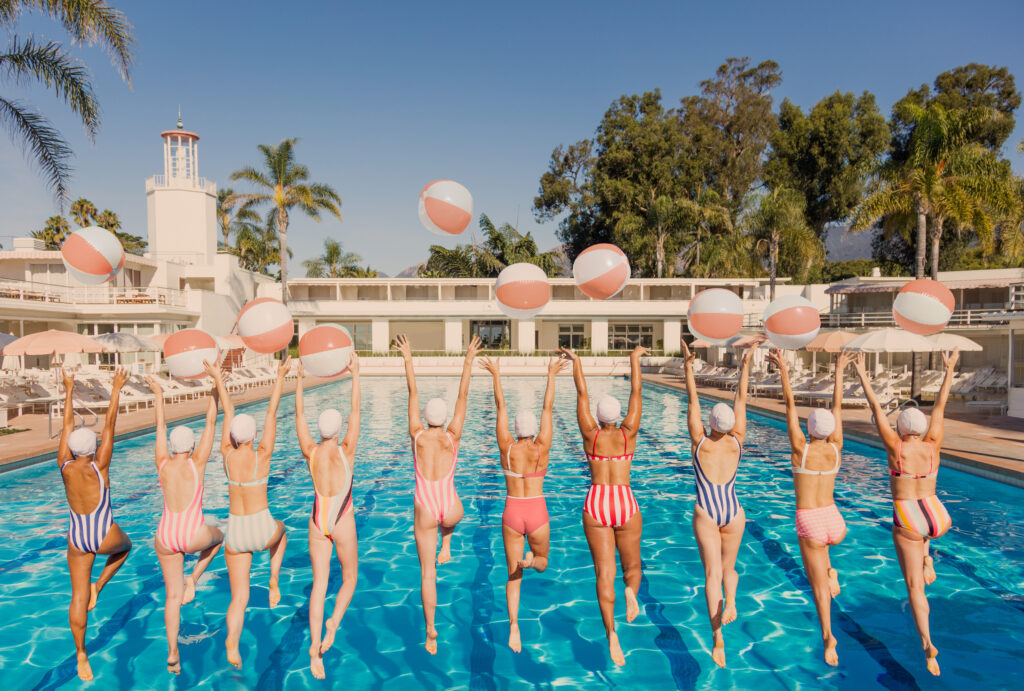 First published in Vie Magazine as, Privacy, Please! History and Creativity are Alive at the Coral Casino. Photos provided by The Coral Casino Beach & Cabana Club

In private homes in Montecito, paintings of the Coral Casino Beach and Cabana Club hang as a tribute to days gone by. “The Coral” or “The Casino” as it’s called by true locals – since rumors suggest it was intended to be a gambling establishment – has been one of the most exclusive private clubs in California for almost a century. The story behind it is pretty juicy.

Robert Odell, the main shareholder of the Pacific States Savings and Loan Company who acquired the Santa Barbara Biltmore Hotel in foreclosure in 1935, was a native Nebraskan whose boisterous personality rubbed Santa Barbara country clubs owners the wrong way. Instead of vying for approval, Odell redesigned the hotel’s former Biltmore Beach Club into the Coral Casino Beach and Cabana Club as a private place for affluent families and the Hollywood elite. He built a larger than Olympic-size saltwater pool, a thirty-foot high dive was installed, and in front of two-story cabanas, steam-heated sand was used for decking. Today, the high dive and sand are gone, but glass double-doors open to a more modern scene where an intimate world of California glamor and intrigue still remain.

One treasure from the Odell years was hiring Hal Boucher as the resident photographer. Hal was to the Coral Casino what Bill Cunningham was to the New York Times. He captured a revolving door of families and celebrity members, including Bing Crosby and Zsa Zsa Gabor and famous visitors like Clark Gable, Greta Garbo, and Benny Goodman, Gregory Peck, Rock Hudson, Lana Turner, and Ronald and Nancy Reagan. Even the Kennedy’s called Hal to take photos while vacationing on their honeymoon nearby. In personal photo albums, debutants pose for Hal in long white dresses with handsome escorts on the former dance floor under the stars, and his iconic images of swan-divers still float around the internet and inspire to this day. Since 1948, Hal came to work every day until sickness befell him in the last year of his life in 2019.

The bulk of the staff worked at the Casino for decades, and it’s those personalities who gave the Coral Casino a small-town feel. For example, Hedi in the front office was known for running a tight ship, and it was she who decided (not the parents) if young boys were too grown to enter into the locker rooms with their mothers. Or Trudy, “with the big red hair,” who ran the snack bar, The Raft, and would chase you out if you were caught inside without a towel, wetting the floor. “The Raft is where everybody gathered, and you didn’t have to dress up,” Daphne Moore said, a Coral Casino member since the forties. “You could have ice cream and cheeseburgers and just be happy.” The Raft’s menu offered simple fare such as chips, milkshakes, or the “Mickey Mouse,” a classic peanut butter and jelly sandwich. Hot fudge Sundaes were served later in the day, but braver souls sipped the “Whale Watcher,” a powerful rum drink ordered at the poolside bar. Daphne drifts back to fond experiences she shares with her family even now – not only did she and her brother take swim lessons in the iconic saltwater pool, but her children and grandchildren did as well. Daphne’s family is just one example representing four generations at the Casino.

During World War II, the Army-Air Crops used the Biltmore hotel as a “redistribution station for reassignment of overseas returnees.” Soldiers could stay up to fourteen days for $2.41 per day, including breakfast, lunch, and dinner. Men in uniform were occupied at the Casino by the passing celebrity, ping pong games overlooking the beach, and California beauties frequenting the club. Because of this and many other events, the Coral Casino was designated a historic landmark in 2003.

After a forty-year ownership by Odell, the club changed hands several times before Ty Warner, founder of Ty Inc. and inventor of the Beanie Babies, bought the Biltmore in 2000. With that, the Coral Casino underwent a 65 million dollar renovation with Hall of Fame architect Peter Marino to emphasize the club’s original scale, light, and feel. A complete restoration meant menus at the Casino have been elevated as well. For example, the Tydes Restaurant and Bar offers panoramic views and seasonally inspired cuisine; Fins is a casual walk-up for juices, smoothies, and healthy bites; and at the Coral Reef Bar, you’ll watch the sun disappear into the Pacific bellied up to the 275-gallon saltwater aquarium bar.

Membership to the Coral Casino is as coveted as the Augusta National – the waitlist is long, you must be vetted by a member or grandfathered in, and the once three hundred dollar initiation fee is now in the hundreds of thousands. But there is a loophole for non-members to enjoy. Since the Coral Casino and Cabana Club is now part of the Four Seasons Resort, The Biltmore Santa Barbara, guests can enter without an additional fee depending on your room category.

In 2017, the same year as the Coral Casino’s 90th anniversary, fine art and aerial photographer Gray Malin shot a 1960s series evoking an endless summer vibe of vintage bathing beauties in dreamy peach, turquoise, and pink hues. (Photos with titles such as “Beach Ball Splash,” “Aprés Swim,” and “Lounging Ladies” are possibly already tacked on your Pinterest boards.) He’s not the first notable name to make the Casino a creative hub. In the 1950s, Louis Vuitton presented white-gloved models down a runway atop the pool and another, showcasing the Louis Vuitton Cruise line for the Coral Casino Beach and Cabana Club’s grand reopening in 2008.

Throughout changing ownership and renovations, what’s unalterable through modernizations are the locals who come for a swim, visitors unwinding in chaise lounges with drinks in hand, and families savoring quality time under the sun. The Coral Casino is a time-capsule of social history, a place you feel lucky to set foot in. And on any warm California day, you’ll hear lifelong members finish conversations with words they’ve uttered many times before: “I’ll see you at the Casino.”

What it’s like for Commercial Fishing Woman, Emily Ekbom