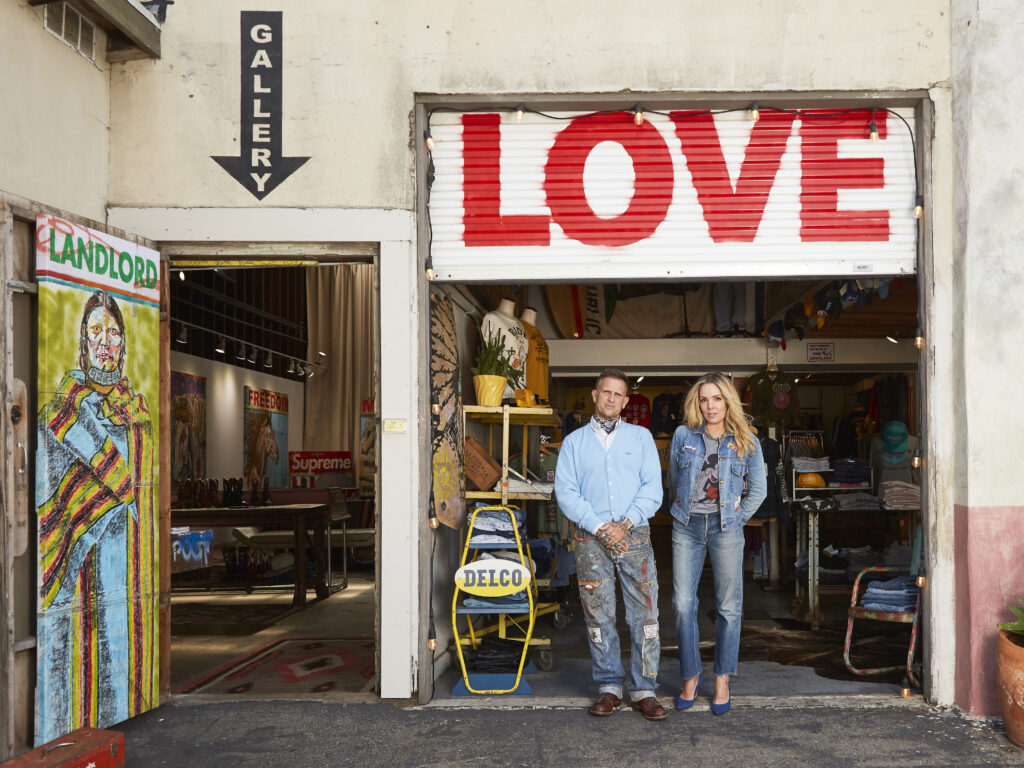 It’s not just a clothing label; it’s a vibe. A place where the soul of each vintage piece speaks to the soul in you. Together, Wallace Piat, an Americana pop-artist, and Jill Johnson, a natural stylist and seamstress who photographs like a GUESS model, form Loveworn, a barely three-year-old brand that exudes Americana-meets-California meets your dream road trip with an epic sunset.

The jaw-dropping array of vintage denim and reworked vintage pieces in what can only be described as couture artisan-style are edgy-for-some yet bring a “Joie de youth” for women and men of every age. Take, for example, their vintage Saks Fifth Avenue camel hair blazer with a metal-studded lapel and spray-painted sleeve, a luxurious cashmere cardigan with punk band Blag Flag stenciled on back with attached fur collar, or old-school Levi’s with sewn-in African indigo fabrics, vintage patches, and bright hand-stitching along the pocket and down the leg. “We’re creative together, and we trust each other,” Jill said. “We see eye-to-eye on things.” This isn’t their first rodeo.

Jill and Wallace, once married and now forever besties, opened a popular predominantly vintage clothing shop in 1991 called True Grit. For sixteen years in Santa Barbara, they specialized in coveted old American denim that amassed a huge following overseas. (In other words, they were big in Japan.) The couple scoured vintage shops around the country, a true time-suck for those not dedicated or patient enough to withstand the hours it takes to find wearable treasures. But they thrived on it. The self-proclaimed “thrift shop junkies” ran through thrift shops, holding prized vintage finds overhead like world heavyweight wrestlers hold shiny gold championship belts. They sold a ton, they learned a lot, but after a decade and a half, they called it quits. Wallace focused on his craft, mostly large-scale Pop-Americana paintings, and battled an alcohol addiction he’s since overcome (Wallace shares his art along with his recovery on Instagram @wallaceisart), and Jill moved out of state to pursue other passions. Though they lived separate lives, the two kept in touch.

It was just three years ago that Jill returned to Santa Barbara and almost immediately signed a lease for an abandoned warehouse in the Funk Zone and persuaded Wallace to take a look. (The Funk Zone is named from the “funky” industrial warehouses that were home to artists and start-up businesses since the mid-1900s and have since turned into contemporary restaurants, tasting rooms, and a few local boutiques.) Wallace was reluctant at first, but once Jill rolled up the garage door to the large dusty space with concrete floors and lime green walls, the spirit of True Grit bubbled to the surface, and the two said, Game on.

The trouble was, they had no inventory—only a vintage American flag, which they quickly hung and built the Loveworn aesthetic around. “We literally had nothing to open a clothing store,” Wallace said. “But we did everything on a budget, and we kicked ass.” In just two months, Jill and Wallace worked fourteen-hour days to bring a reimagined “denim body shop” to life. “We cranked out t-shirts, folded Levi’s, visited swap meets, found cool racks, hangtags, and sewing labels…” Jill said.

They built a shop that’s turned into a kind of cultural movement, an incubator for the brand: while one side of the space is the store, the other is home to Wallace’s gallery, creating a unique museum of its own. “I hate using the word fashion, but I like style,” Wallace said. “Some people have immense style. They’ll mess around with thrift shop shit, and it’s not new fashion, but they made it fashion in that way.” Both Jill and Wallace sew, redesign, and paint clothing to create truly unique pieces known as “punk-rock couture,” and social media has taken notice. People from all over the country follow @Lovewornsb on Instagram and travel to the former warehouse turned cool-kids clubhouse to dress like them. And if someone’s on the fence, wondering if they can pull off the Loveworn style, the tipping point occurs when they cross the threshold. “Once people are in the atmosphere, they get it,” Jill said. “You can feel the energy in the store, in what you pick up or see.”

They’re rebellious in their craft, not sticking to any one way of creating a piece. But there’s a method to the madness, and they’re proud of it. While many artists protect their creative process, Jill and Wallace post videos on social media as if to say, This is what we do, and we’re doing it our way. For example, they use “old-school” screenprint screens made by Wallace back in the day to make shirts to paint in. And the techniques they use to paint t-shirts and reworked vintage items are primitive. In response to those questioning why they use regular paint instead of proper screen printing ink, Wallace answers the way a true painter would, “Well, we could. But it’s not as opaque…” It’s what he’s used to, he knows how to use it, and has a ton of it. “If someone asks, ‘Do you have a yellow?’ We’re like, right here…we have 5 different hues!” It’s that perfection and spontaneity that people gravitate towards and devour to the point where most wear Loveworn purchases right out of the shop.

“Wally and I have a fun time, too. Sometimes we even amaze ourselves,” Jill said. “At times, we won’t have a plan and just say, Let’s try this in baby blue. Maybe teal? Sure!” The collaborations never end – even during the interview, they discussed how to style short-shorts for spring and what screens to use for the next t-shirt collection. Where Jill adds a feminine flair, Wallace sprinkles rock ’n roll. Purists of vintage, Jill and Wallace honor the past and celebrate the present. As Jill put it, the essence of Loveworn “feels like your favorite pair of jeans, your dad’s fuzzy sweater, or your boyfriend’s old shirt you can sleep in.” In other words, clothing that has lived. In the best way.

How-To Live Together in an Airstream