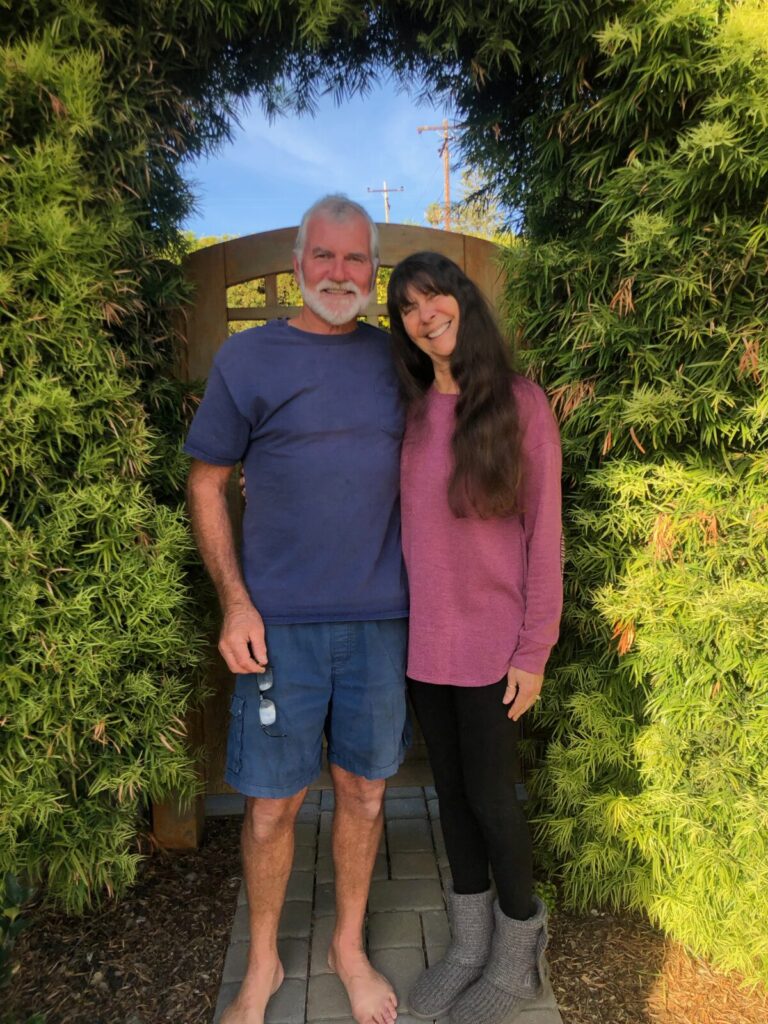 I jokingly call Jolene Colomy the “Holy Grail” of partners of commercial fishermen because, after thirty-six years of being with a fisherman, homegirl knows some tricks of the trade! And by trade, I mean building a life and raising kids with a man that spends more time off the coast of Santa Barbara, California, than at home. Jolene’s husband, Jim Colomy, is known around the Santa Barbara fishing community as pioneering a high-level of lobster fishing at San Nicholas Island. I think that designates Holy Grail status, don’t you think? 🙂 This interview is a juicy one, so I’ve broken it up into two parts to digest in small-but-powerful bites. Let’s dive in… 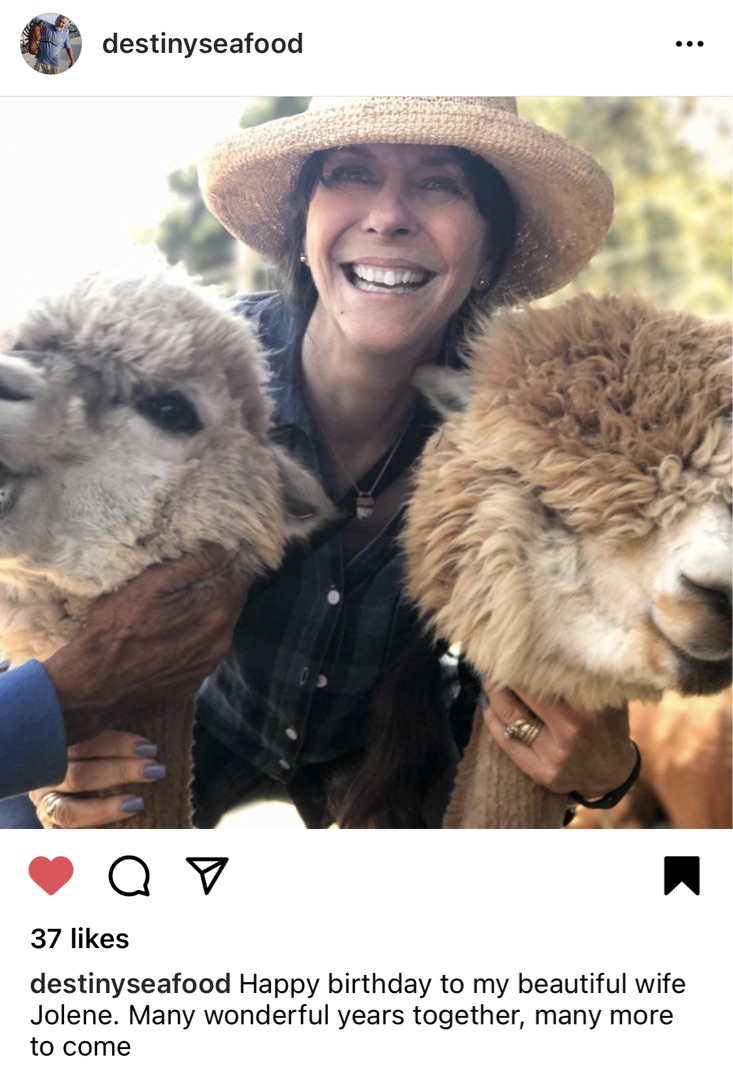 What were your biggest concerns when you first started dating?

We actually knew each other way back in high school but never dated or anything like that. Jim dated a girl that lived across the street from the house I moved into, so he was like the second person I met when I moved to Santa Barbara at sixteen. We ran into each other at a softball party that he crashed. That was a team that I was playing on. We started dating two days later.

He was in the process of building his boat and finishing his boat. This was in August of 1984, and then, three to four weeks later, he put it in the water. Then there was the acquisition of traps, and he didn’t have a lot of money. This was 36 years ago.

So he had really funky traps. He had to get those all ready together, just like any other young guy getting started in the industry. So, I’m just sitting back thinking, Well, this is interesting. My father had sailboats, so I was familiar with the harbor, the sailing, and all of that jazz, but not the fishing industry. His job started within months of us starting to date, so I had nothing to compare it to because we both started from square one. We were building a relationship while he was building a career, which I think had some advantages.

I was just finishing all of my paralegal education at UCSB at night while working during the day for a law firm. So, I was completing my education at the same time he was starting a new job. I had a nine-to-five job working, plus homework and going to school at night. He had a job where he’s gone two or three days and then came home to figure out what he needs to do just for a day, and then go back out for two or three days at a time. So, we kind of had that schedule already started. When I figured that we were actually staying together, as time went by, it would be okay. That somehow this would work.

In what ways did you know your relationship would work?

I think the biggest part of it is we both brought different things to the table completely. I get seasick. How’s that for fun? So we both had respect for what each other did, and the biggest piece of our relationship, especially on his end, was trust. And it came naturally to us. I guess I projected enough that I was trustworthy.

You have to imagine somebody that’s out on the ocean days at a time home for just hours gone again, there has to be a trust factor, or it isn’t going to work. And that has been with our entire relationship to this day. It started in ’84, and here we are in 2021, and the trust has never diminished.

Oh yeah. There’s that emotional trust that has to go with it as well.

So many layers of that word.

Yeah. It, it does have a lot of layers. I mean, I’ve lived in this town since I was 16 years old. I know a bazillion people, and he knows that. I know that he can’t be doing a whole lot cause he’s fishing off an island.

Tell us about your early family life and your transition from work to stay-at-home mom.

In our first year and a half together, we bought a townhouse before we even got married. We kind of just knew. And then we sold that. In 1987, we qualified for a loan to build our current home, and our first daughter Amy was born in July of ’88.

So, I quit work and went from being a paralegal to being a stay-at-home mom. We knew there would be some rough times financially because my paycheck was gone, my insurance is gone. Fortunately, we had insurance when we had Amy, but we didn’t have insurance when I had Lauren. She was cash on the barrel of a planned C-section because the insurance wouldn’t cover me.

Long story short, we ate a lot of burritos, we didn’t go anywhere. We didn’t drink any wine. But we were just fine. The girls knew their daddy worked and was gone a lot, and that was okay. When he’s home, it was great. And when he was gone, we were still great.

How did you keep in touch with Jim before cell phones?

We would talk on the radio. We had a USB radio, kind of the fishermen’s radio, with a different set of bands than a CV. We had a boat radio here at the house with an antenna. He had his radio, and we’d get on Channel 16 to get each other and then move to another channel so that we would at least check-in. When the analog cell phones happened, Jim had a big bag phone that he would take out.

Now, he has a BMS tracker on his boat. The Department of Fish and Wildlife said he needed it to track his boat at all times. I have access to that website as well. We lovingly call it his “ankle bracelet” because I know where he is when he goes out.

How did you find support while he was away?

The good news is I’m very independent. And in all honesty, I hope whoever reads this understands that you need to be independent to a large degree. You need to be really flexible. Early on, I told him there were three days in the year that he was never to work ever: Thanksgiving, Christmas Day, and the day after Christmas, which is his birthday. I said, those three days, you must not work. And we’ve never balked on that. I don’t say, You have to be home for New Year’s or Valentine’s day. Oddly enough, we managed to have all our birthdays during the offseason.

Lobster season runs from October to March, and it was/is a pretty dependable fishery. I knew he was going to be gone for two days. For example, work Sunday, Monday or come home Tuesday, work Wednesday, Thursday come home Friday. I mean, I literally sing that song to myself because I knew what days he was to be home when, and that was very dependable. In California, salmon fishing, especially this coastline, is not dependable time-wise. A salmon fisherman’s wife will have to go with the flow or be willing to drive up and meet at whatever port they happen to be in. Yeah. It’s, it’s two completely different fisheries.

Did you have different concerns/worries while Jim fished both fisheries?

One thing that Jim is excellent about is he takes incredibly good care of his boat. He is really careful and has an inordinate amount of respect for the ocean. He knows that he’s just a little cork in that big old ocean. Mother nature could come anytime, and that’s it. He’s had some close calls with completely unexpected stuff, but he immediately addressed it and was lucky.

This is just a classic story: His maiden voyage of the boat back in 1984, he built this beautiful boat, but he didn’t want to scratch up his deck with these new-to-him traps, so he lays screen down on the deck to protect it. The thing was, the screens were covering the scuppers, and as they headed out to San Nicholas Island, they hit some weather.

He took on water. The boat starts to list, the traps are leaning over, and Jim goes to get a knife. The knife falls over the side of the boat. More water’s coming in. They’re starting to go in a weird direction. Jim happened to have a Swiss army knife in his pocket that somebody gave him, and he was able to cut the rope, and half his gear went overboard. The boat righted itself, and they kept going.

I don’t know any of this because this is early, two months after we started dating.  He comes to my office that afternoon with a big bouquet of flowers. I said, “What happened? Why are you bringing me roses?” So that was the very first day Jim took the boat to really go fishing. It was quite a welcome to commercial fishing! (Continued…)

*READ PART 2, where Jolene reveals how they managed their money through each fishing season, and more!*🐟

Can you relate to any of the experiences Jolene has shared? We’d love to know in the comments below!

The Diff Between UK Partners & Us