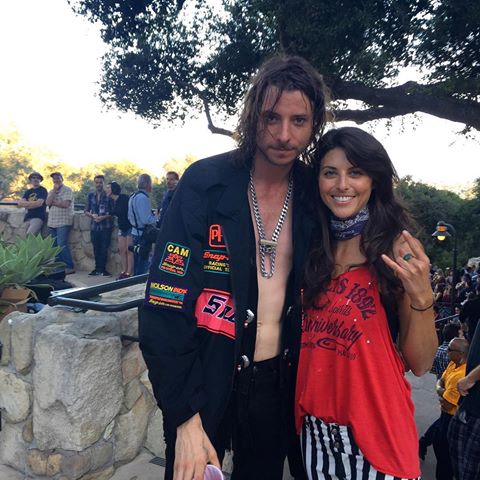 (Me and badass drummer Alex Carapetis, formerly of Wolfmother, at the Santa Barabra Bowl in 2016.)

Recently I was asked how I conduct professional interviews and realized I didn’t think to ask that simple question before my first real assignment to interview fashion designer Isaac Mizrahi (seen here!).

That night, in the Bloomingdales in Orange County, I was ready: I had my questions prepared on a small notepad, I wore a leather jacket, and my hair was on point. Good to go.

But when Isaac entered the building, I was starstruck and realized I had no idea what the F I was doing.

As fans waited in long lines for his autograph, journalists were quickly ushered to speak to him first.

I was second to go, and I was wiggn’ balls.

How would I write his answers fast enough? Am I blowing my chance here?

Thankfully, I noticed the woman in front of me using the Voice Memos app on her iPhone to record the interview.

Thank you, random boss lady for inadvertently teaching me a journalism trick I that I still use to this day. I hope you will find this helpful, too!

The second trick is:

Sometimes you have to ask the basic questions to get the story right. But do your research and work that information into the form of another question.

You can email the artists or their PR people to fact-check if you have time.

More importantly, get deep and ask the questions YOU really want to know because that’s one reason why journalism is so amazing: you can enrich your life by asking questions and, in turn, enriching the lives of others.

Below is an interview I conducted with the band DubTrio for the Santa Barbara Sentinel, one of the independent papers in Santa Barbara, California. I sent these questions via email with a deadline of a week to have them answered, written into a piece, and published. I hope you enjoy it!

Dub Trio is opening for Incubus next week in Santa Barbara, and people are already talking about the show. If you haven’t heard of the band before, this performance isn’t their first rodeo. Hardly from it.

In the game for almost two decades, Dub Trio’s newest album, The Shape of Dub To Come, includes legends such as King Buzzo from The Melvins and Troy Sanders from Mastodon to give you a clue.

So, where do their name and sound come from anyway? Linking the musical talents of bassist Stu Brooks, guitarist David Holmes, and drummer Joe Tomino, the hard-to-define group reaches audiences in areas such as electronic, rock, punk, and heavy metal while holding true to the roots of Reggae. The live shows take what they’ve made in the studio and, as each member “dubs” over one another, they create a signature sound that results in musical performance art.

The boys can better explain.

Dub Trio talks about art, masochism, and the importance of putting a value on your artistic skills in the interview below:

1. Creating art can be incredibly beautiful yet incredibly hard and painful at the same time. I’ve realized that all artists, whether musicians, writers, painters, or comedians, deal with these feelings during the creative process. The struggle is so real, but we don’t know how to function without it. Masochistic, in almost. In that sense, how do the words “art” and “masochism” relate to you? Or does it relate at all?

Joe Tomino: Anytime you express a feeling or emotion through a creative process, like art, you always draw upon your experiences in life. Whether your trying to convey an emotion or tell a visual or aural story, art is something that can be both personal and subjective. Masochism and art are one way to go about it, but it doesn’t have to come from where Van Gogh or Elliot Sharp were coming from. Since our music is almost entirely instrumental, the timbres, grooves, and frequencies are what impart emotional in our music.

2. Tell us about your collaboration. Is your creative process more freeform or do you have a structure when making songs?

Joe Tomino: We have approached working singers by sending them a finished instrumental version for them to add vocals to. The songs we’ve composed for vocalists could easily be instrumental compositions. However, when you get back a great vocal track performed by someone who understands our vision and concept, it’s something special. We have also done some remixes for bands, and that’s a whole different approach for us. It usually involves seeing how and what the vocal may inform from an emotional and lyrical standpoint. From there, we use the tools at our disposal in the studio to come up with something that sounds inherently like Dub Trio.

3. What advice would you give to an artist struggling to put a price on their art? What was that experience like for you when Dub Trio started getting noticed years ago?

Stu Brooks: The most important thing is to not undervalue your own work. The more time you put into your art, the more value you can give it.

4. What advice would you tell your younger self?

5. How would you describe Dub Trio and your latest album to people who haven’t yet been graced with your talents?

Stu Brooks: Dub Trio is an instrumental genre-bending Dub Reggae/Rock crossover band. In 2004, our first album was on the world music shelves in record stores, but over the years, it has progressively moved to metal, rock or experimental sections.

Defining the band with a genre has always been very challenging and confusing to new fans as well. Our latest album, the 6th that we’ve done, is entitled “The Shape of Dub to Come.” This title is more of a statement explaining our intent and describes our belief that dub is more of a process than an actual genre.

Traditionally, Dub is a subgenre synonymous with reggae. It came out of Jamaica in the 1960s and gave birth to the modern-day remix. Usually, dub emphasizes the “riddim,” strips back vocals and lead instruments, and turns up the bass, then “dubs out” the drums with delays, reverbs, and other effects and processes generally done by audio engineers. As it is usually a process that happens in the studio or by a sound engineer behind a desk, what we have done differently is taken the same process and developed our own technique to apply it to ourselves live on-stage. Over time, we have progressively expanded the styles of music we apply this technique. So not only reggae style songs and rhythms but also punk rock, metal, sludge, doom, noise, electronic, shoegaze, ambient, hip hop, and glitch hop.

Live, we create a unique “version” of a song every time we play it, as we improvise our dub techniques over the course of a song. We usually write a song that has a “dub section” where we create space and improvise using traditional dub sounds like reverbs, delays, filters, samples, and other effects. It can turn into a musical dialogue or conversation between the three of us. It is super fun because we can react in the moment with our respective instruments or dub effects, creating in real-time new improvised arrangements but within a predetermined form and sticking to certain parameters using the unique language that we have developed together over nearly 20 years.

This album is a culmination of 20 years of playing together. It is our first album with other vocalists besides Mike Patton.

It has King Buzzo from The Melvins, Troy Sanders from Mastodon, and Meshell Ndegeocello all as guest vocalists.

Stu Brooks: Can’t wait to get to SB Bowl with Incubus! It will be the last show of this run, and I feel it’s a perfect place to celebrate the end of the tour!

David Holmes: Can’t wait to play Santa Barbara Bowl. We played there once before a Matisyahu’s band (on Rebelution’s Good Vibes Tour), and it was great! Dub Trio will be a whole different sonic experience! We will be sipping your finest coffee and eating your best vegan food!

Megan Waldrep is a freelance writer who traded life in Mexico on a 34′ sailboat for a 22′ airstream in Carpinteria, California. She also writes a relationship column called I Heart under the pen name Elizabeth Rose. What does all this mean? Find out at: meganwaldrep.com

If you liked this, catch up on the Freelance Writing series: (Part 1) Buck the System & Create a Remote Work Life