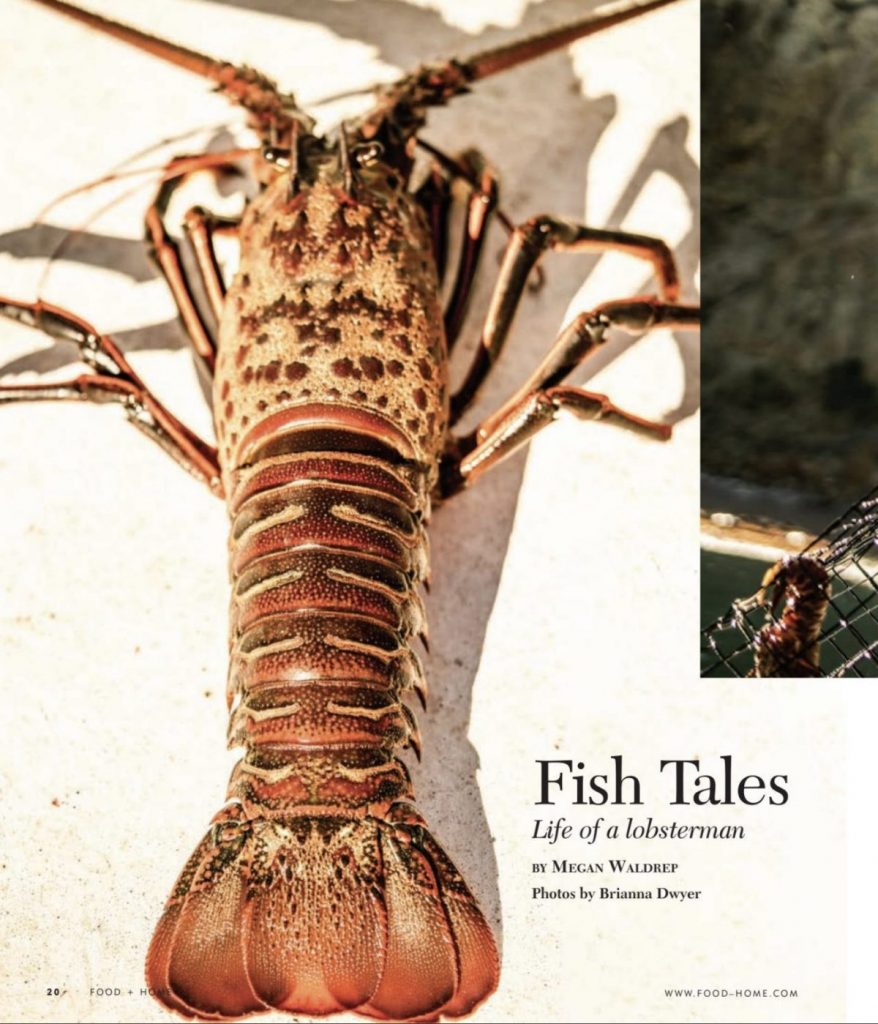 A Day in the Life of a California Spiny Lobsterman, published in Food + Home Magazine, Fall 2021. Photos by Bri Dwyer

It’s five in the morning, and my husband, Chris Dabney, is heading out to sea. From the first Wednesday in October until mid-March, he leaves before dawn to drive his boat to the Channel Islands to commercially fish California spiny lobster. During the season’s peak, his twelve-to-fourteen-hour days are as predictable as the next: checking traps, rebaiting, resetting, selling lobsters, lather, rinse, repeat. Yet preparing for the season is a full-time job before the dock lines are touched. Months before the opener are spent sourcing trap materials, molding the metal into precise wire-mesh cages (three hundred to be exact), dipping every trap to withstand saltwater erosion, tying on ropes and buoys after painting each one.

Though the job is repetitive, the weather and market price are equally unpredictable. Weather conditions change rapidly between the islands and the mainland, vessels are known to sink, and freak accidents cause fishermen to fall overboard. Add long hours, strenuous labor, and lack of sleep to make the fatality rate for commercial fishermen over twenty times higher than the average American job. (Which means worrying for a fisherman’s safety is constant for their girlfriends, fiances, wives, and families.) To add to the stress, fluctuating market prices determined by supply and demand from international markets, trade wars, and even the pandemic mean fishermen are generally unaware of how much they’ll make until they dock the boat.

Other challenges affect a fisherman’s catch, including natural predators like sheepshead, otters, and octopuses. For example, octopuses latch on to traps and use their beaks to tear apart and suck the meat. Then, there are the unnatural predators, like sport divers, who are known to poach traps. Recreational lobstering begins a few days before the commercial season, and sport divers are notorious for smuggling commercial traps. (Note to sport divers: taking from traps is not lobstering, it’s called stealing.) 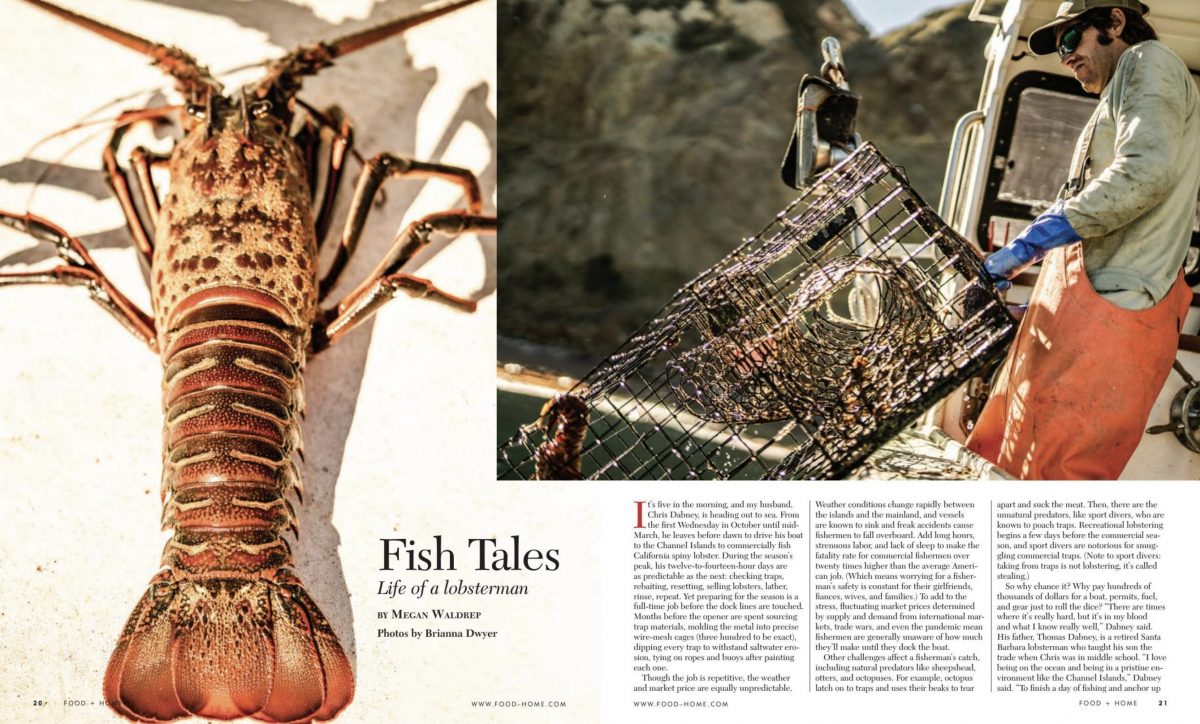 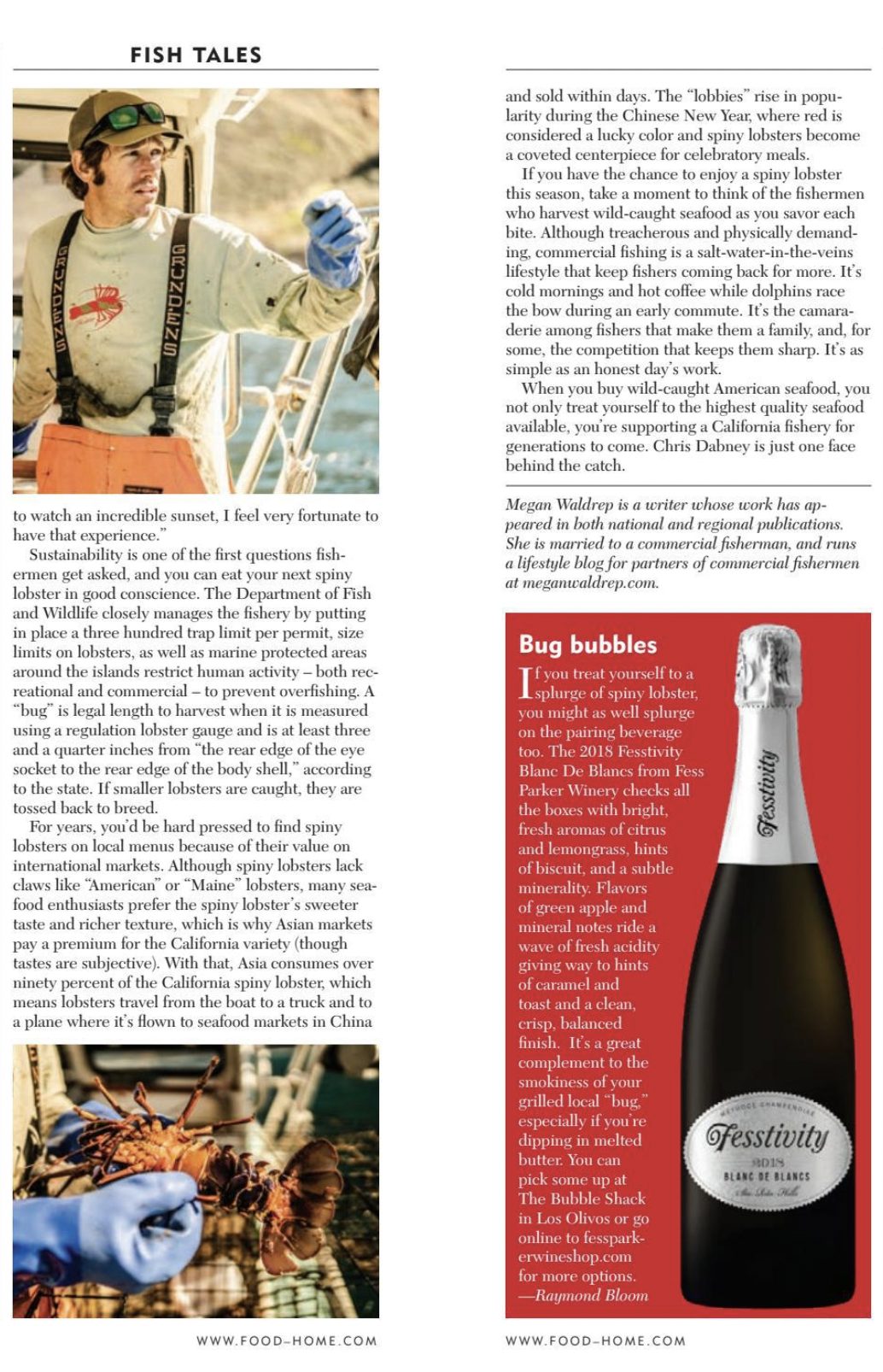 So why chance it? Why pay hundreds of thousands of dollars for a boat, permits, fuel, and gear just to roll the dice? “There are times where it’s really hard, but it’s in my blood and what I know really well,” Dabney said. His father, Thomas Dabney, is a retired Santa Barbara lobsterman who taught his son the trade when Chris was in middle school. “I love being on the ocean and being in a pristine environment like the Channel Islands,” Dabney said. “To finish a day of fishing and anchor up to watch an incredible sunset, I feel very fortunate to have that experience.”

Sustainability is one of the first questions fishermen get asked, and you can eat your next spiny lobster in good conscience. The Department of Fish and Wildlife closely manages the fishery by putting in place a three hundred trap limit per permit, size limits on lobsters, as well as marine protected areas around the islands that restrict human activity – both recreational and commercial – to prevent overfishing. A “bug” is of legal length to harvest when it is measured using a regulation lobster gauge and is at least three and a quarter inches from “the rear edge of the eye socket to the rear edge of the body shell,” according to the state. If undersized lobsters are caught, they are tossed back to breed.

For years, you’d be hard-pressed to find spiny lobsters on local menus because of their value on international markets. Although spiny lobsters lack claws like “American” or “Maine” lobsters, many seafood enthusiasts prefer the spiny lobster’s sweeter taste and richer texture, which is why Asian markets pay a premium for the California variety (though tastes are subjective). With that, Asia consumes over ninety percent of the California spiny lobster, which means lobsters travel from the boat to a truck and a plane where it’s flown to seafood markets in China and sold within days. The “lobbies” rise in popularity during the Chinese New Year, where red is considered a lucky color and spiny lobsters become a coveted centerpiece for celebratory meals.

If you have the chance to enjoy a spiny lobster this season, take a moment to think of the fishermen who harvest wild-caught seafood as you savor each bite. Although treacherous and physically demanding, commercial fishing is a salt-water-in-the-veins lifestyle that keeps fishers coming back for more. It’s cold mornings and hot coffee while dolphins race the bow during an early commute. It’s the camaraderie among fishers that make them a family and, for some, the competition that keeps them sharp. It’s as simple as an honest day’s work.

When you buy wild-caught American seafood, you not only treat yourself to the highest quality seafood available, you’re supporting a California fishery for generations to come. Chris Dabney is just one face behind the catch.

Did this change your mind about wild-caught seafood in any way? How so? Please share in the comments below!

If you liked this, you’d love The Last Hunter-Gatherers: Commercial Fishing in America

Letter: My Fisherman Cheated. Now What?

1 Perfect New Year Resolution for Fishermen Partners (Plus 7 More if You Need Inspo!)