In northwestern Washington, Serena Dabney, Bri Dwyer, and I sit around the dining room table near a large window looking over the Salish Sea. Serena’s four-month-old baby boy, Waylon, is bobbing gently in his bouncy chair, cooing and smiling as his mom reflects on a decade of commercial fishing in Bristol Bay, Alaska and her transition to start a family.

She explains that Bristol Bay, specifically, is an “uprooting fishery” where fishermen need to drop everything for months in the summer before returning home to resume a normal life. (A fishery is defined as a place where fish are caught for commercial purposes.)

There’s no room for early motherhood in Bristol Bay. If you’re picking fish from a gill net, pregnancy and breastfeeding are impracticable, let alone dangerous. If Serena wanted a family, giving up a life she knew was the only choice.

“Initially, it was really hard,” she said. “It felt like a huge part of my identity was being given up for something I didn’t immediately have to replace it.” Three years after her last season, Waylon was born along with her new identity as a mother.

Though Serena no longer fishes, her husband, Dave Jennings, has been a commercial fisherman for twenty-two years and continues to fish the bay for sockeye salmon. “Knowing that commercial fishing is still part of our family is really important to me,” Serena said. “Coming from a commercial fishing family, my dad fished, and now I’m with someone who fishes, I don’t feel that I’ve totally lost it because it’s still part of our family identity even though it’s not part of mine.”

Serena’s older brother, Chris Dabney, is also a commercial fisherman in Alaska and recently took over their father’s spiny lobster permit to fish in Santa Barbara, California. That’s how we’re all linked; Chris is my fiancé, and Bri is a professional photographer who shot pictures aboard Dave’s boat a few years ago when Chris was a deckhand.

Bri Dwyer captures the lifestyle more vividly than any photographer in the game, and after seeing her images and pen-paling for a few months, Bri traveled to California to shoot the lobster fishery and we became quick friends.

Married to Captain Sean Dwyer – a former cast member on Discovery Channel’s Deadliest Catch – Bri says shooting the industry is a way to understand her husband’s career more intimately. “I am drawn to the work ethic and physicality of the industry and what both of those bring to my images,” Bri said. “It’s real sweat, real sacrifice, and real people working hard. Every image I create on the water is exactly what’s happening in real life.” 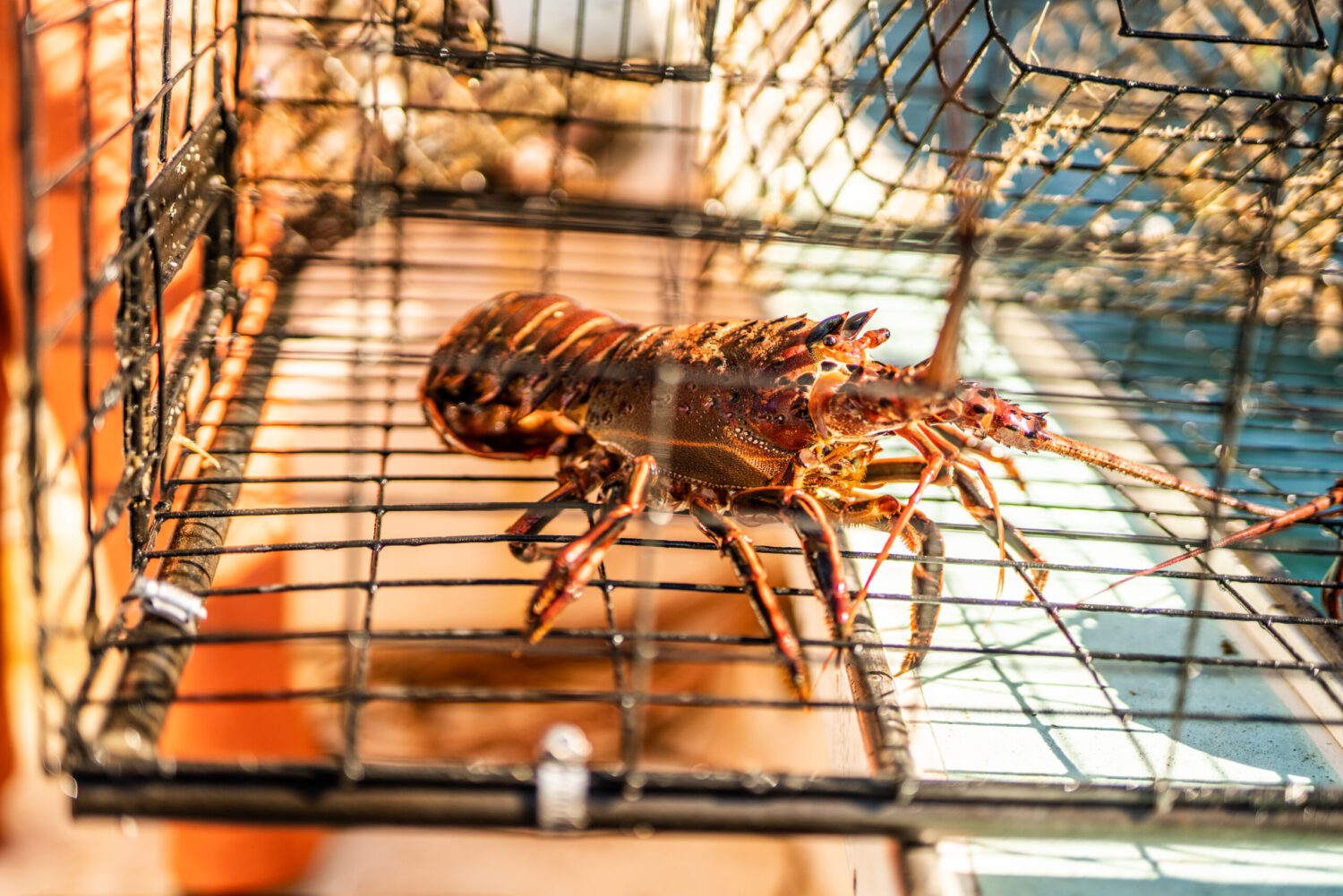 While commercial fishing in Bristol Bay, only the strong survive. Long hours, lack of sleep, no showers, or contact with family for weeks is taxing both mentally and physically. Not to mention forty-knot winds, cold weather, and confused seas that make commercial fishing one of the most dangerous jobs in existence. Which really means, only the strong survive if they’re vigilant and lucky.

It’s saltwater-in-the-veins and the potential to make a year’s salary in a few short weeks that call fishermen to a job that many wouldn’t dare. The industry is so huge it produces over a billion dollars worth of seafood every year, yet people within the industry are connected less intricately.

For partners of commercial fishermen, it can be a solitary life. For months on end, a partner must handle all household responsibilities, care for children and pets, and keep spirits high until their loved one returns home again.

Finding other women who can relate can be few and far between, which is why the private Facebook group, Partners of Commercial Fishermen has acted as a support community for women to express worry and stress to like-minded people.

This group is also helpful when, for example, you discover your fiancé will hire a female deckhand for spiny lobster season. A deckhand that will sleep in the same cabin as him a few nights a week. A woman who will spend more time with your man than you will for six whole months. This was a personal struggle I dealt with last year. Trying to remain calm when I first heard the news, I asked Chris why he decided to hire a woman.

“I hired Emily because she had a lot of previous fishing experience, which is a huge plus. She had fished in Alaska, which is definitely one of the more demanding fisheries out there, and she came highly recommended by a buddy of mine who said that she was tough and reliable.” Chris explained that hiring deckhands is a game of chance. You don’t really know how they will perform or if your personalities will mesh in a difficult work environment from a simple interview. “Emily seemed eager,” Chris said. “How quickly they want to start and how much they want to work is a good indication that they are a hard worker and there to make some money.”

Trusting our relationship, I quickly realized how hard it could be for a woman in a male-dominated profession. I not only wanted to ease added stress to her situation; I wanted to be a friend, too. 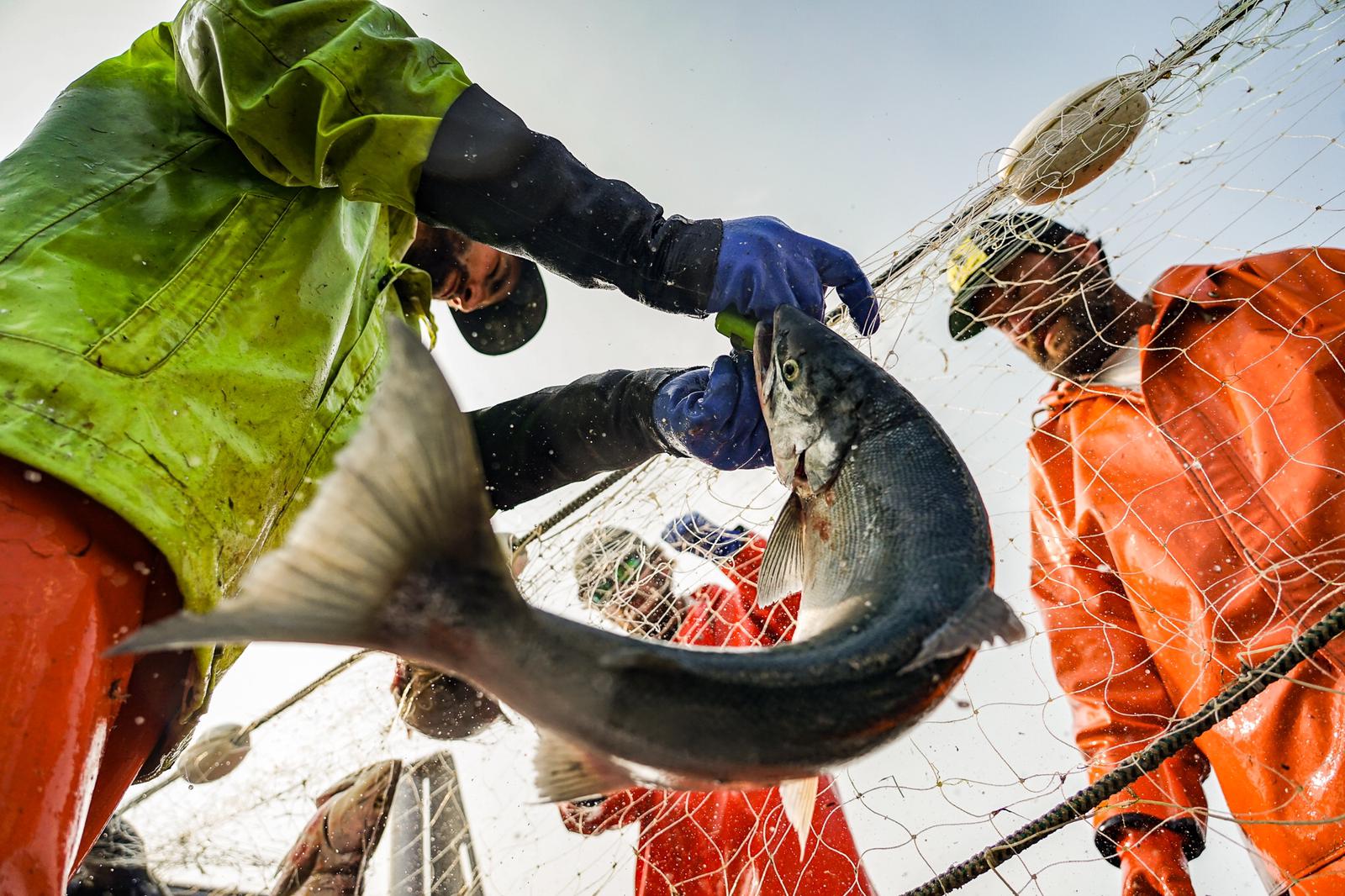 Deckhand Emily Ekbom is thirty years old from Michigan, who discovered commercial fishing after moving to San Fransisco. But the small-town Midwestern girl-at-heart wanted more than partying at big-city bars. “A friend of mine randomly called and said he was heading back up to Alaska to work on a boat, and I knew that’s what I wanted to do,” Emily said. She rented out her apartment, sold her car, quit her job, and moved everything into storage. “I found a girl captain on Craigslist, of all places, looking for girl crew members to help her catch salmon on her seiner in Kodiak, Alaska.”

Since then, Emily has fished four fisheries along the West Coast and says she hasn’t had problems with men being inappropriate. “More so, problems with guys being able to comprehend they’re on an even working field with a chick.”

Though money is not guaranteed – fishermen do not know what they’ll be paid until the boat is docked at the end of the season – and the weather can be gnarly, to say the least, Emily looks to the simple pleasures, like living on a boat for months at a time, watching Orca whales cruise by, and the freedom of no cell phone service. A slower life. “I love being able to unplug and just live in every moment, good and bad,” Emily said. “We over complicate our lives with so many unnecessary things and distractions.”

Remembering a conversation with Dave, that’s how he sees it, too. Once an Army Ranger, he explains that the challenge of harsh conditions is part of who he is. “It’s a lot of why I was drawn to Buddhism in high school. This whole life is transient and the suffering is how we take it in our mind,” Dave said. “If you try and perceive it a little differently, it’s not that bad. There’s beauty out there.”

Dave admits he’s more drawn to boat building than commercial fishing, but he’ll fish as long as it stays profitable. “I’d love to continue for twenty years and have Waylon take over, but I also don’t care if he does,” Dave admits. “I’d also love to spend the next twenty years (boat building) in the winter and sailing with him all summer.”

Back in Washington, baby Waylon has fallen asleep. Serena, Bri, and I clear the table and quietly say goodbye before Chris and Dave return home for dinner. With both parents, an uncle, a grandfather, not to mention great uncles and second cousins, who have been or currently are in the industry, Waylon could be a third-generation fisherman to enter the grind.

But no matter where his life may lead, Waylon embodies thousands of families who make up the American commercial fishing industry, a mighty group of men and women who are some of the last hunter-gatherers in America’s last frontier.

Are you a part of a commercial fishing family or partnership? What’s the experience like for you? Please share in the comments below!

In Case You Missed It:

Strength of the Tides Pledge

OPEN LETTER: “I’M WORRIED ABOUT THE PARTYING IN ALASKA”

HOW-TO SEND A CARE PACKAGE TO YOUR FISHERMAN

Strength of the Tides Pledge

What It’s Like to Protest Alone in Montecito, CA