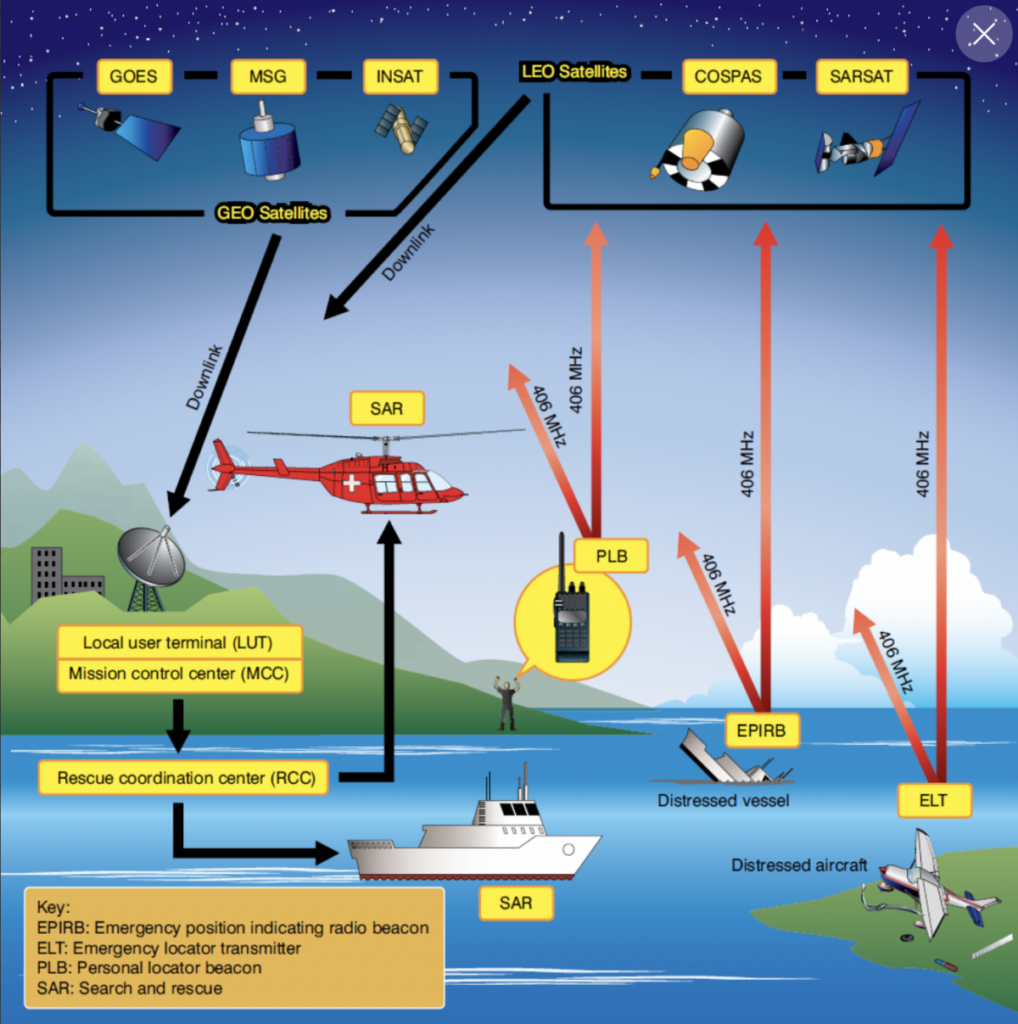 6 Marine Safety Devices That Could Save Your Fisherman

My fisherman left at five this morning without a Garmin InReach because we couldn’t find it. Recent engine trouble makes me nervous, but what can I do? It’s the nature of the beast, boat stuff happens, and Chris needs to pull traps “today.”

Commercial fishing is not the enemy, but rather anxiety, and over the years, we POCFs have learned to tame the worry. However, it is reassuring to have more than good vibes and a satellite phone to protect your fisherman, especially with stories like this from Jim Colomy, a forty-year spiny lobster commercial fisherman out of Santa Barbara, California:

“I’ve fished alone for years now. After a close call years ago when my seat broke, and I almost went over while my boat was doing 16 knots on autopilot, I bought a kill switch from Emerald Marine.”

His wife, Jolene, offers excellent tips on raising a family with a fisherman here, and his daughter, Lauren, who is also in our community, confirmed dad’s advice with a DM. (Hey, Lauren!) 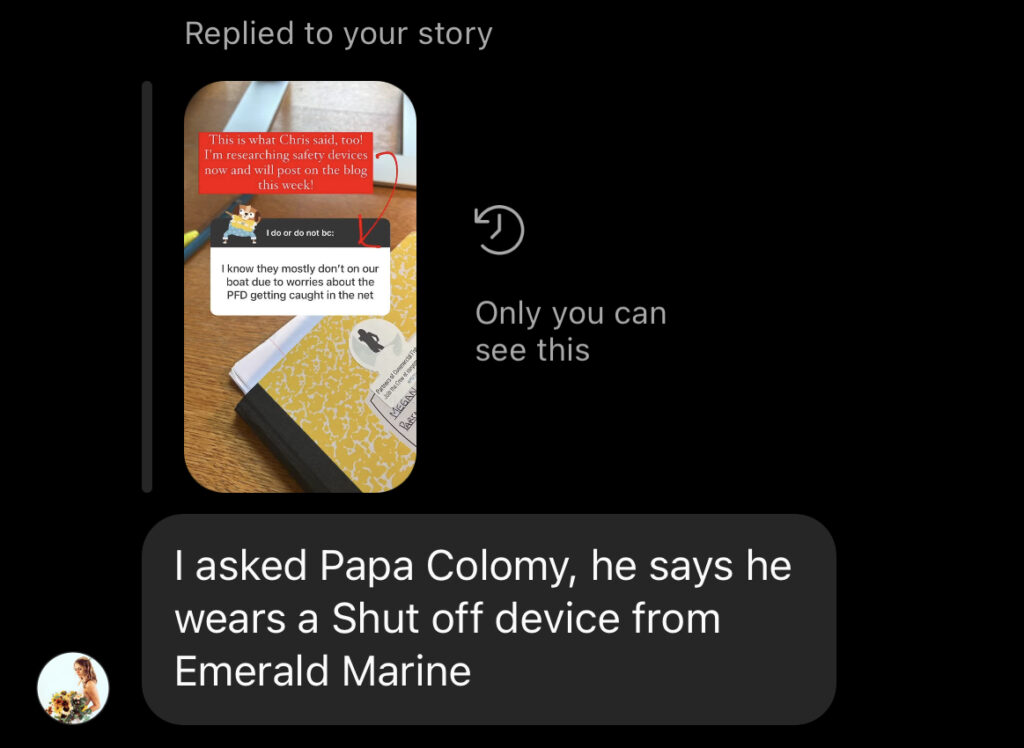 Here’s a quick reference for marine safety devices to make this easier because it’s confusing AF:

I relate an MMSI to a boat’s social security number plugged into the vessel’s VHF radio system to broadcast the boat’s position for travel and emergencies. I believe you need an MMSI number to connect with a few devices linked below.

Or the walkie-talkie-looking thing that truck drivers also use. Channel 16 is the primary channel to contact the Coast Guard and communicate with other vessels. Vessels connect on channel 16, then move up or down to connect on a less public channel to share information (or shoot the sh*t).

When someone falls off the boat and into a body of water.

PFDs are usually designed as vests with manual or automatic deployment.

A basic tool using satellite signals to locate a person anywhere in the world, both land and sea. Transmits signals for up to twenty-four hours. Generally not waterproof unless specified on the device.

Basically, a PLB on steroids. It’s made for water, will transmit for up to 48 hours, and floats.

A “kill switch” is a device that cuts off the engine if the captain or crew (depending on the device) is MOB. A kill switch can come in the form of a lanyard or connects to the device via Bluetooth.

Satellite Messaging devices act as personal locator beacons with the added feature of messaging loved ones, similar to text. Two-way satellite communicators allow loved ones to text back, but a basic one-way will do if you just want your fisherman to check in from time to time. Here is a popular Garmin InReach used in our partners of commercial fisherman community and a more basic model here.

I was also thrown that Chris doesn’t wear a PFD or EPIRB “because it gets in the way.” I mean, I get it, but where does the boundary lie? I mentioned this to our partners of commercial fisherman community on Instagram Stories, and fellow POCF Tyler Rose-Counts summed it up perfectly:

“I’m always curious about whether the perceived risk of entanglement is, in reality, greater than the risk of falling over without a PFD 🤷🏼‍♀️.”

POCF Bri Dwyer Pacific Northwest crabbers generally do not wear them, but some Alaska fishermen wear low-profile inflatable vests like this one by Kent Safety. 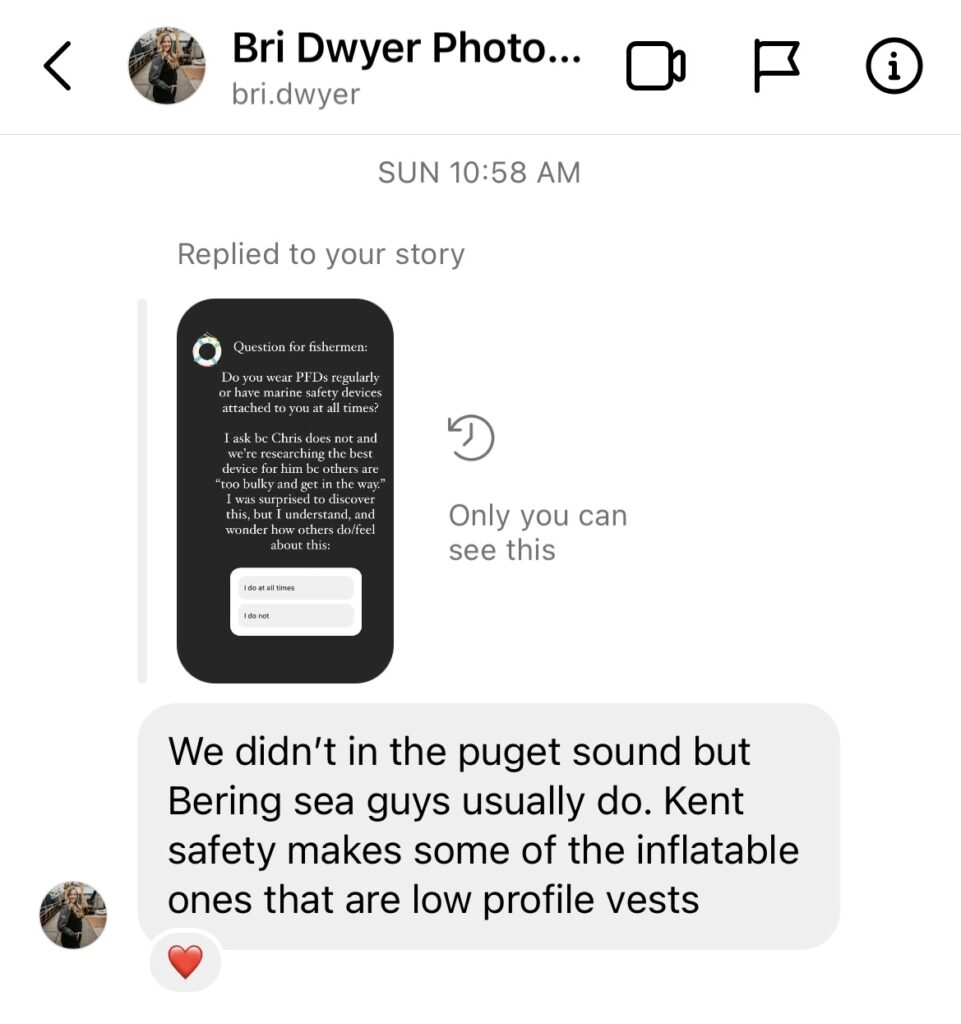 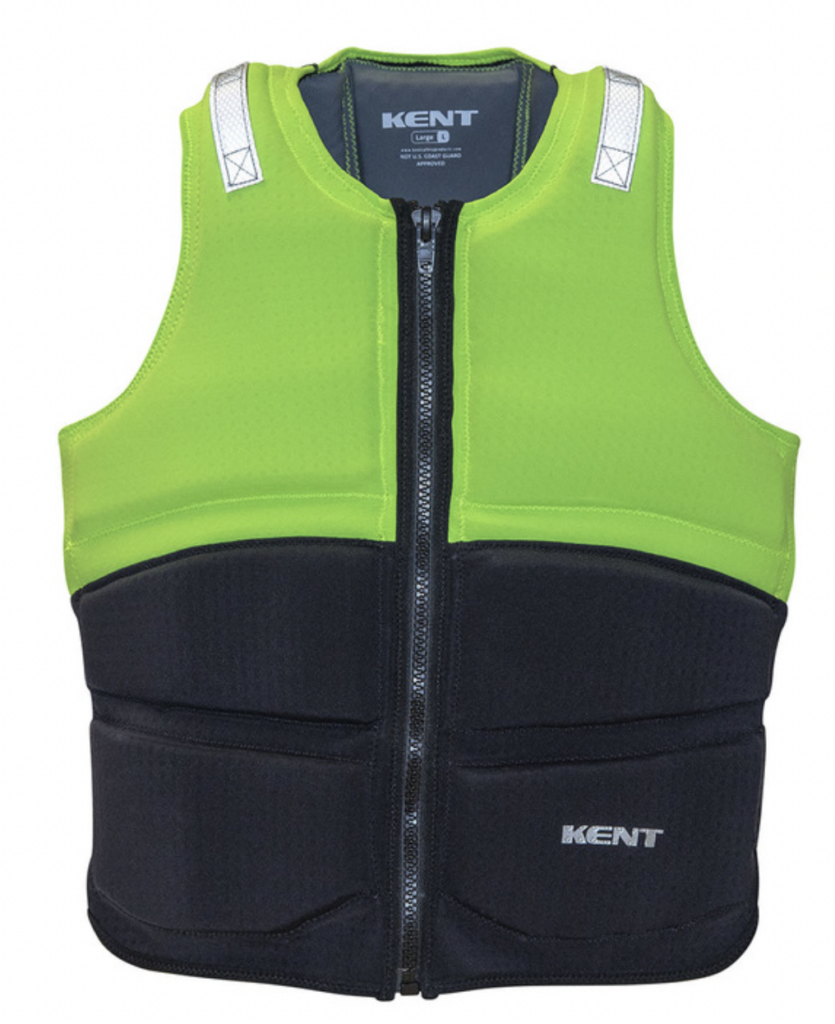 I pressed Chris further about his emergency plan, which he described as DFO or “Don’t Fall Overboard.” He explains that once you’re overboard, you’re kinda screwed because your boots fill with water, causing you to sink. Great.

I ask what he’ll do in a MOB situation.

“I’ll climb back on the boat.”

What if the boat speeds away?

How will you swim if your boots are filled with water?

Thankfully, our convo inspired Chris to finally register for a Marine Mobility Service Identity Number (MMSI), which he did for free through BoatUS, a vessel assist program. (Non-members pay a twenty-five dollar fee to register an MMSI.)

I should note that BoatUS does not respond to emergencies, but only assists with water towing, road towing for trailer boats, refueling, and free MMSI numbers and discounts for members. The term “vessel assist” has limits here.

I dug through various marine safety devices that may work for your fishermen, both captains and deckhands alike. I hope you find them helpful, and I wish you prosperous and safe fishing seasons to come! 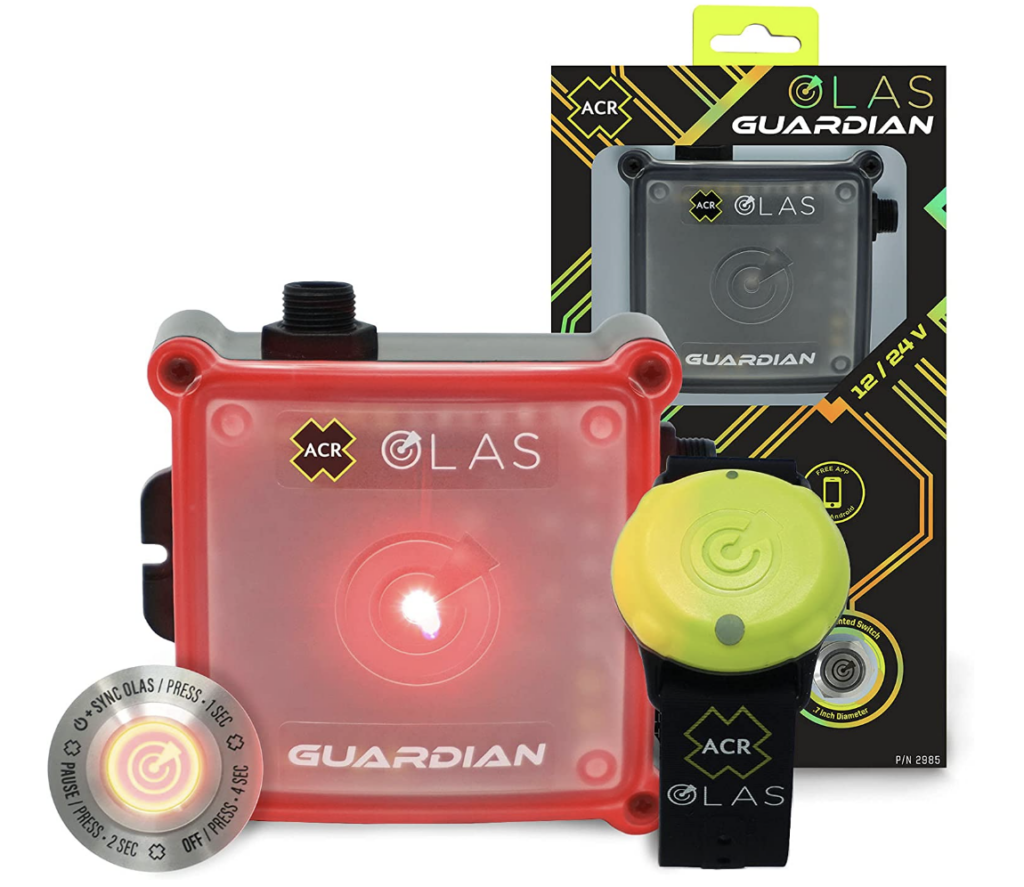 The OLAS Guardian is a wireless engine shutoff “kill” switch that works for both inboard and outboard engines on vessels up to 50 feet (or up to 80 feet with the extender, though they’re shaking out the bugs.) An emergency engine shut-off button can be installed, so anyone onboard can assist with MOB ASAP.

The alarm and visuals sound “in two seconds of a Man Overboard (MOB) situation,” and the kill switch works without a cell phone if needed. Otherwise, it links to the app via iOS (Apple) and Android through Bluetooth. (You don’t need Wifi or a cell signal to work Bluetooth.) Made in the USA. 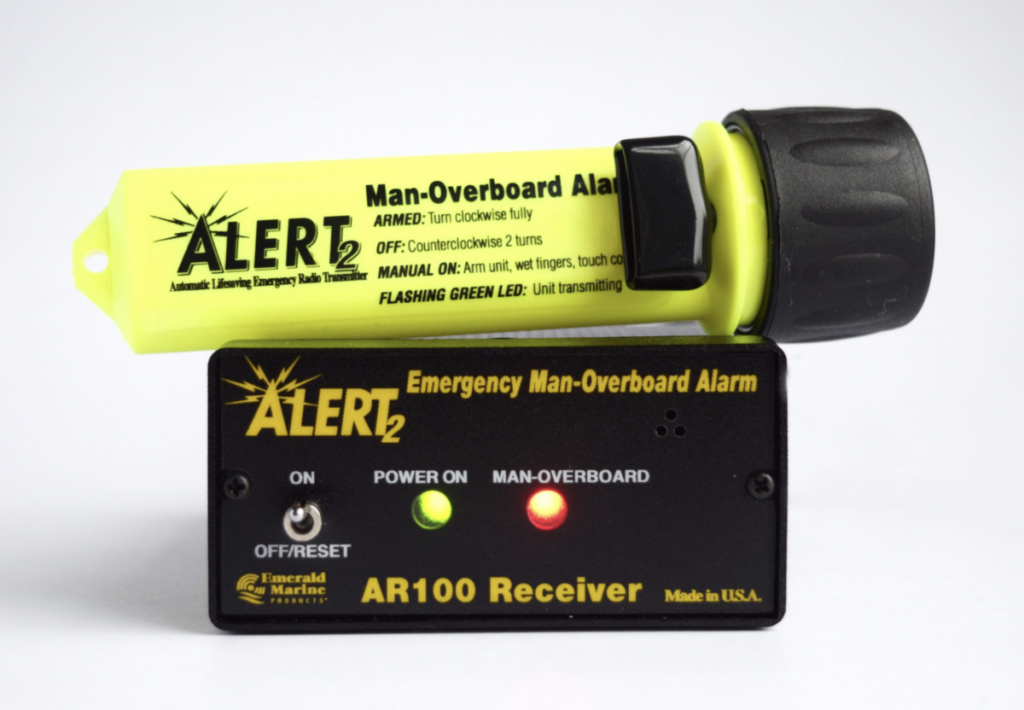 This is what Fisherman Colomy uses. Like the OLAS, the wearable Alert transmitter sends a signal to the Alert2 receiver as soon as  MOB hits the water to kill the engine. An internal alarm and a red “Man Overboard Light” is emitted. It can also be set up to mark the chart plotter to keep track of MOB positioning. 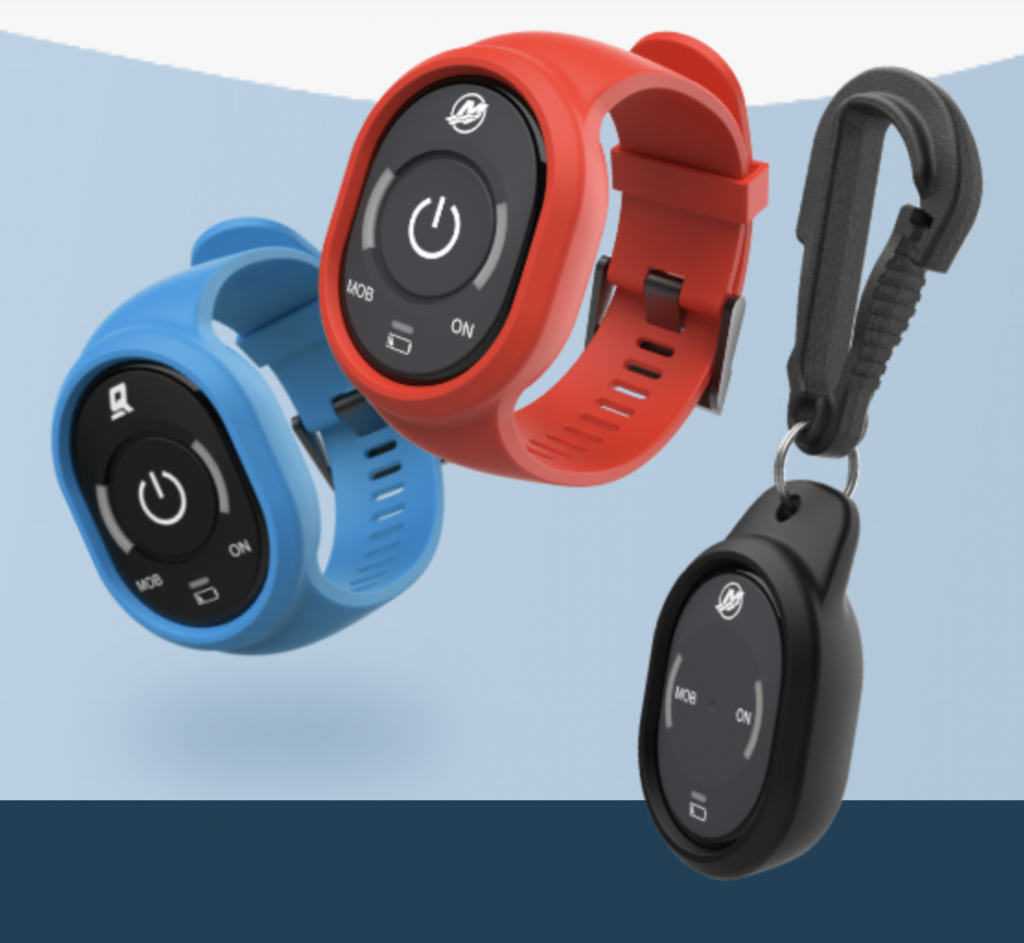 I believe this only works with outboard engines and also works through Bluetooth. The small, wearable fobs work for the captain (or onboard pet), and wristband fobs for the crew sound alarms and give GPS locations for MOB. It operates through a downloadable app for Android and iOS. 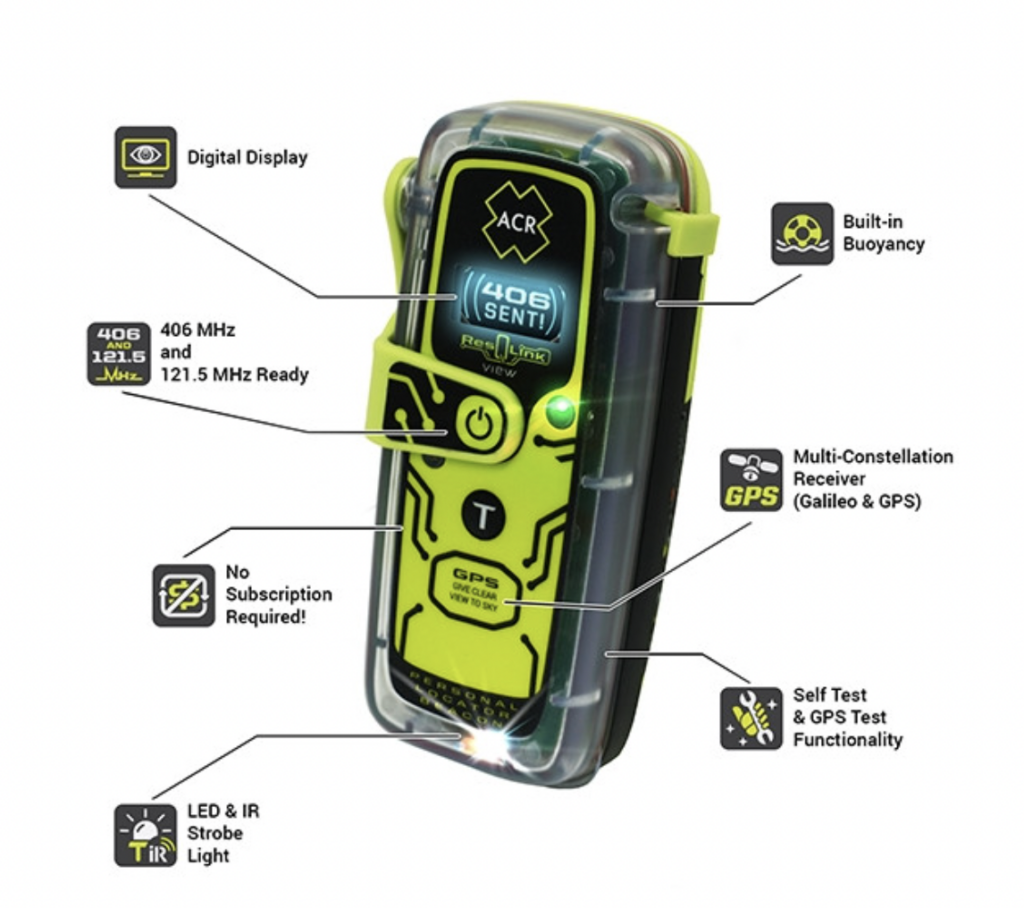 ACR RESQLink VIEW 425 PLB is a personal beacon you attach to a PFD. It has a digital display, and features listed in the image above, and no subscription is required. I’d imagine having a digital display confirming your signal to a worldwide range of rescue satellites would be hopeful in this situation. The RESQLink can be used as a PLD on land or sea, which is perfect for the adventurous fishing couple who loves a road trip or backpacking in the wilderness. Wristband fobs for the crew are sold separately. 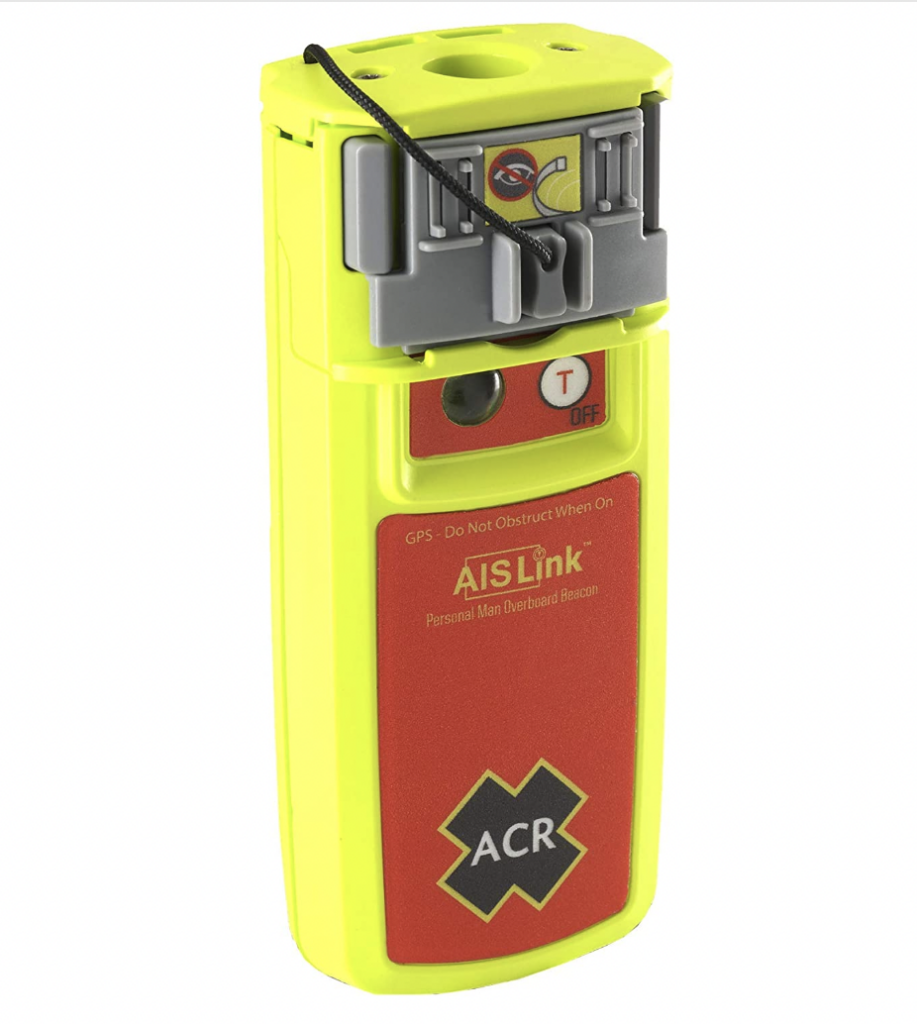 ACR 2886 AISLink MOB Personal AIS Overboard Beacon attaches to a lifejacket and activates fifteen seconds upon inflation or within fifteen seconds. Instead of linking to rescue satellite signals, it sends an alert to vessels with AIS receivers or AIS-compatible chart plotters up to five miles away (conditions depending) with precise GPS location. It can also alert the crew via a DSC alarm on the vessel’s VHF radio. Strobe light assists with location as well. 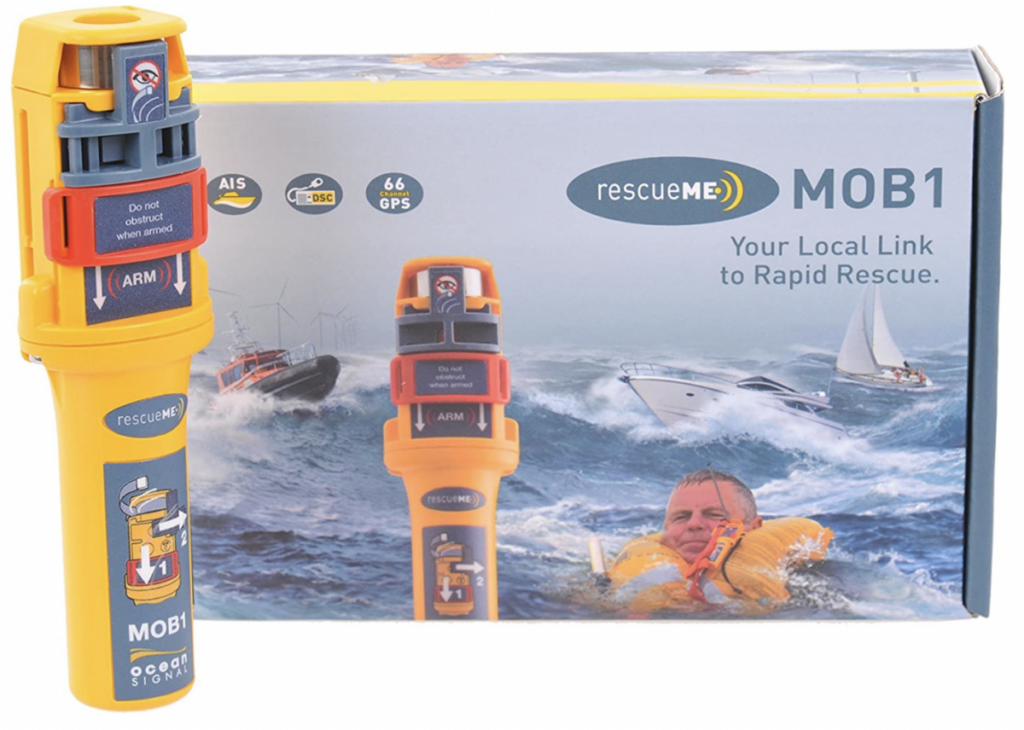 Ocean Signal rescueME MOB1 is said to be the “world’s smallest AIS with integrated DSC” (or digital selective calling). It attaches to a PFD, then connects a digital signal to alert VHF radios “to sound the DSC alarm and can alert neighboring vessels within a five-mile range,” sending the first alert within fifteen seconds through manual or auto-deployment. Touts a seven-year battery life and a five-year warranty.

Do you own any devices listed above, or did we miss a good one? Please share in the comments below!

WANT TO MEET IN REAL LIFE? SEE YOU AT THE PACIFIC MARINE EXPO IN SEATTLE!

5 Micro-Luxury Items from The Dollar Tree To Pamper Yourself

A Cinderella Story for Partners of Commercial Fishermen